Now that I’m over a week into my elimination diet, I thought I’d share a little update on it. 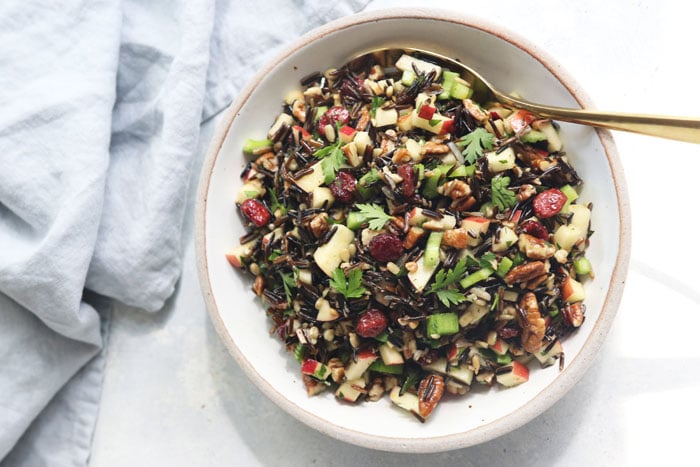 Cheese. In general, dairy is the biggest thing that I miss right now. I love having a splash of heavy cream in my morning coffee, and adding a sprinkling of cheese to my salads, so I’ve been trying to come up with truly satisfying alternatives for both of those things. (See below!)

Cookies. Austin and I have been addicted to a gluten-free & nut-free cookie recipe I’ve been playing around with for the last month or two, but it calls for grass-fed butter and eggs… so those are a no-go for me right now. I miss them! I’ve been trying to work on a vegan version this week, but they’re not the same yet.

Food freedom. In general, I’m missing the ability to share bites of any food with my kids (they do still eat gluten & peanut butter, though neither likes cheese at the moment). It’s weird not having the option to eat whatever I want, especially since I’ve worked so hard over the years to have a normal relationship with food after suffering with binge eating for so long. I thought doing an elimination diet might trigger the urge to binge eat again, but I think I’ve given myself enough leeway with elimination-diet-friendly snacks that it hasn’t become an issue at all.

What I’m Loving So Far:

I do feel better. Within the first two days of my elimination diet, I noticed that I’m not tired after meals. I used to get so tired after eating, that it sometimes felt like someone drugged me! I feel totally content and awake after meals right now, and I feel less bloated as well. I was over-doing it on nuts for the first few days, so I still had moments of feeling too-full, but I think I’m on the right track.

I’m feeling more creative. Somehow restriction brings out the creativity in me, possibly because I want to make sure I’m still eating REALLY delicious food, even with my limitations. I’m coming up with ideas faster than I write them down!

I’m less anxious. I tend to be an extremely anxious person in general, but I’ve been feeling less so over the past week. I think it’s because partially do to the food I’m eating, and also due to the fact that my choices are limited. Having too many choices can sometimes be overwhelming, so I think in this case, having more limits is a good thing for me. The less decisions I have to make, the better!

Rather than show you just a single day’s meals, I thought I’d share what I’ve been eating over the course of the week since my meals tend to be a bit repetitive. I’ve been living on leftovers, so I don’t have to cook a brand-new meal every day, and I’ve also been relying on lots of snacks during busier times of the day. 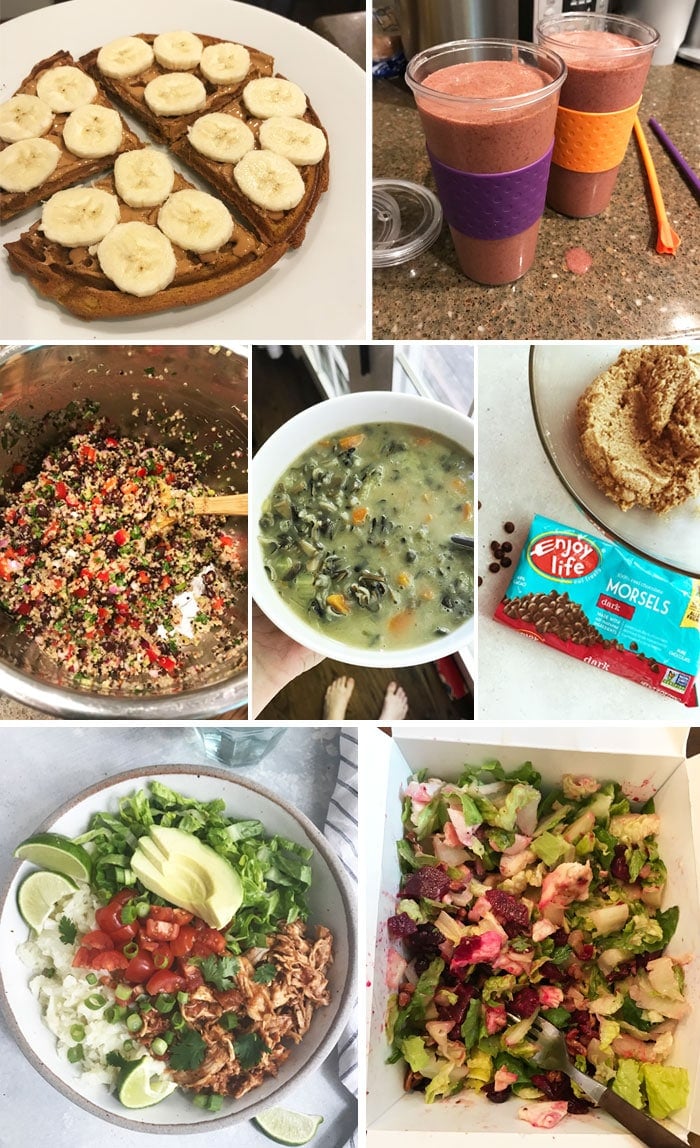 Coffee: I got in the habit of drinking coffee again during the last month of finishing up my cookbook (no sleep + kids = necessary caffeine), so now I’m hooked again and I’m seriously missing a splash of heavy cream in it. If you follow my Instagram stories, you’ve probably seen my attempts at dairy-free creamers all week long! My go-to right now is using my almond milk creamer recipe in this frother— the FOAM it makes is ridiculously authentic, if you’re looking to make dairy-free lattes or cappuccinos. I’ve also tried straight-up coconut milk from a can, which is fine, but I don’t love the coconut flavor quite as much.

Breakfast: Almost every day, my family has smoothies for breakfast. We’ve been having a random assortment of fruit based smoothies (usually frozen mango, berries, banana, and dates) with spinach and some sort of protein added– like hemp hearts or a scoop of collagen peptides. Over the weekend, I made a batch of freezer waffles from my No Excuses Detox cookbook, which are naturally gluten-free and vegan as written.

Lunch: I’ve been using dinner leftovers for lunch lately, which has made my afternoons as easy as possible. Most of the things I’ve been eating are from my upcoming Instant Pot cookbook, because I’ve realized that many of those recipes fit my elimination diet requirements– they’re corn, gluten & dairy-free, and most are soy-free, too, or can easily be modified by using coconut aminos. (Plus, I always test and re-test recipes until I burn myself out! Perfectionist over here.)

At the beginning of the week, I made a batch of Wild Rice & Mushroom Stew (in the book) and heated that up for quick lunches the first few days. It would have lasted longer, but my baby girl is obsessed with eating it, too! I’ve also been enjoying Chicken Burrito Bowls and a vegan Southwest Quinoa Salad (both recipes are coming to the blog soon), and several random salads topped with anything I find in the fridge. I’ve been using the dressing from my Holiday Salad recipe a lot this week.

Snacks: I made a batch of almond pulp hummus after making the homemade almond milk for my coffee. (The recipe for the hummus is in Everyday Detox, if you have it.) I’ve been enjoying that with sliced veggies, Mary’s “Everything” crackers, and I’ve been adding it to salads for a creamy element. It’s the best substitute for cheese I’ve found so far.

When I need a salty/crunchy snack, I’ve been reaching for dry roasted cashews or Jackson’s Honest potato chips. The chips aren’t an ideal healthy snack, but they are made with non-GMO potatoes, coconut oil, and sea salt– that’s it.

Sweets: When I crave something sweet, I’ve been reaching for a piece of Raw Fudge. I also found a bag of allergy-friendly dark chocolate chips from Enjoy Life brand, that do the trick when I need a little something. (I’ve been trying to make cookies with them, but so far nothing is perfect.)

Dinner: I try to make something that my whole family will like for dinner, that I can eat too, so I’m not making too many different meals. So far, the Korean Chicken Bowls and the Chicken Tikka Masala have been big hits from my upcoming cookbook. We’ve also done take-out a couple times, and I kept it pretty simple– one night I got a burrito bowl from Chipotle with black beans, guacamole, and no cheese, chips, or tortilla to keep it all corn-free, gluten-free, and dairy-free. Another night we ordered salads from a local restaurant, and I used my own salad dressing from home to make sure the ingredients worked for me. So far, so good!

Overall, this elimination diet hasn’t been as challenging as I had feared it might be. It helps that I can still have tree nuts and nightshades, as I know some people have to eliminate those, too.

I still have moments where I have the urge to reach for a slice of cheese or a spoonful of my husband’s ice cream (did you see the “Chips & Guacamole” flavor he picked up this week on Instagram?! So strange!), but I’m happy to report that I haven’t slipped up yet! There’s definitely a momentum factor when you do an elimination diet, because I don’t want to slip up and have to start all over again to reach 21 days of cutting something out. Only 2 more weeks to go, so there’s no stopping me now!