Food For Thought: All Calories Are Not Created Equal
Miscellaneous

If you’ve ever attempted to lose weight at some point in your life, you’ve probably heard the popular concept that it’s all about “calories in vs. calories out.” Many health experts would argue that weight loss is as simple as eating fewer calories than you burn– regardless of where those calories come from. 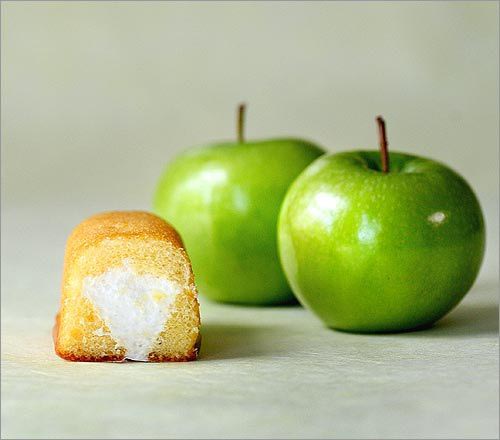 Do we really think a Twinkie is going to enter and leave our bodies as easily as an apple?

According to Dr. Mark Hyman, “The food industry tries to convince us that all calories are the same; that a snack of carrots or Oreos is the same as long as they are 100 calories each. The science proves otherwise.  Sugar calories act differently in the body, driving biology toward diabetes.  And carrots aren’t addictive but sugar is.” [source]

Hopefully, we all knew that already.

But, even when only considering REAL foods, our bodies may actually handle calories differently–> depending on if the calories are composed of protein, fat or carbohydrates.

This was news to me.

Here’s an example of how our bodies handle macro-nutrients differently:

Two British researchers, Gaston Pawan and Alan Kekwick, developed one of the most dramatically effective weight-loss approaches ever researched. They created their break-through diet after studying overweight subjects and placing them into three groups. Each group received 1000 calories a day.

So, if it really is a matter of calories in vs. calories out, all the subjects should lose weight consuming such a low number of calories, right?

So, whoever said “eating fat makes you fat” obviously has never heard of this research. In fact, some “fat fasts” that have proven to be very effective in terms of weight loss! (Dr. Atkins based his “fat fast” on the research above.)

Now, let me be clear–> I’m not recommending you try this at home!

No drastic measures are needed, nor are they recommended, without proper medical supervision. Fat is an effective fat burner only in the absence of carbohydrates, so this would mean taking drastic measures with your diet. I would never recommend cutting out precious fruits and veggies just for the sake of quick weight loss, since I believe gradual lifestyle changes are the key to lasting success anyway.

But this study does prove, in fact, that calories are not in created equal.

Reader Feedback: Do you watch your calories? Have you tried counting calories to lose weight? I’ve definitely “been there, done that”– falling victim to the standard 1200 calorie range, which I think is too low for most women— and I found it maddening to keep track of all those numbers each day.  It’s much nicer not worrying about it anymore!