One of the (many) things that concerns most parents is how to properly feed their kids. It’s a topic I get asked about often, so I thought I’d share a bit of my own limited experience so far. 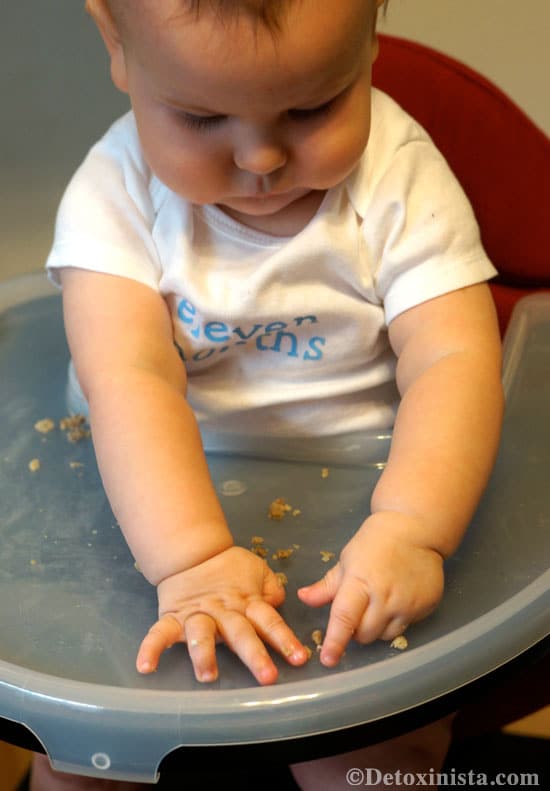 Luckily, the first six months of feeding are easy. Babies only need breast milk, or formula, up to that point.

While some pediatricians will recommend starting solids somewhere between 4 and 6 months, the more updated recommendation by the American Academy of Pediatrics and the World Health Organization is that it’s best to start solids around 6 months of age, which gives babies greater protection from illness and allows their digestive systems to mature. You can read more about the benefits of delaying solids at KellyMom.com, which provides evidence-based information on breastfeeding, pregnancy, and parenting.

We actually waited closer to eight months to start our baby on solids, when he started to show some developmental signs that he was ready for solid food. Starting solids can be a bit scary, since there’s always a possibility for food allergies, but you can mitigate the risk by following these two guidelines:

Which food you feed your baby first is completely up to you. I personally started with avocado, followed by steamed sweet potato, but practically any whole, unprocessed food would be fair game. Some experts think fresh fruit should be first, while others think that animal products should be introduced first, so this is just one of those personal decisions where you’ll just need to follow your parental intuition. 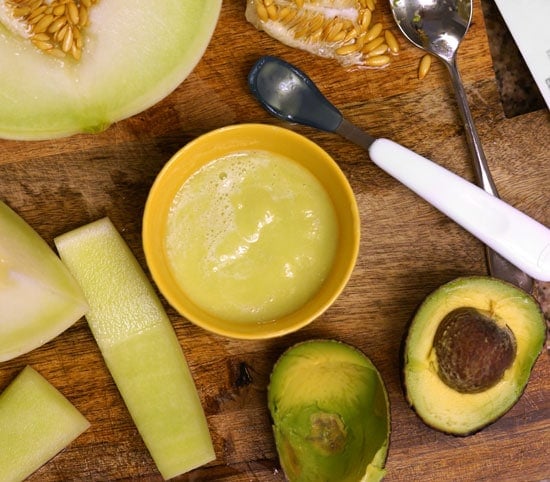 You may also want to be aware of the foods that were once considered “forbidden” before the age of 12 months– though a 2008 clinical report published by the American Academy of Pediatrics has shown that delaying highly allergenic foods may have no protective effect against atopic disease. Again, this is where you’ll want to listen to your gut!

These “forbidden” foods include:

The Weston A. Price Foundation also advises against the common practice of feeding cereal grains to infants under 1 year of age.

“Babies produce only small amounts of amylase, needed for the digestion of grains, and are not fully equipped to handle cereals, especially wheat, before the age of one year. (Some experts prohibit all grains before the age of two.) Baby’s small intestine mostly produces one enzyme for carbohydrates—lactase, for the digestion of lactose. (Raw milk also contains lactase.) Many doctors have warned that feeding cereal grains too early can lead to grain allergies later on.” [source]

Update: We waited until our son was two years old to introduce grains, as I felt more comfortable with that. We did offer him quinoa once around 20-months, and he wanted nothing to do with it.

I’ve personally been too nervous to introduce most of these “forbidden” foods to our eleven-month-old yet, though I did try giving him eggs for the first time just this week– in the form of a pancake. 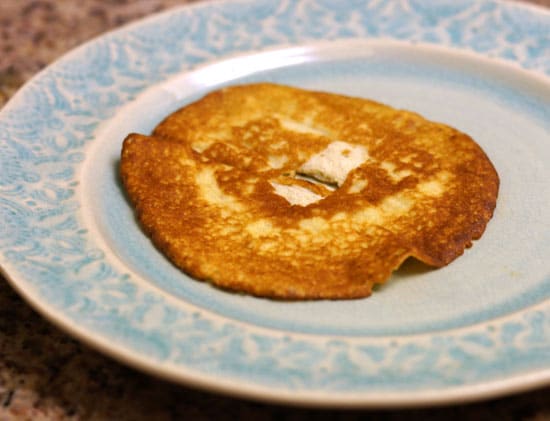 I simply blended together 1 ripe banana with 2 whole eggs and a dash of cinnamon to create this baby-friendly “pancake.” When fried in a skillet, it’s quite delicious, and an easy finger food. (Not surprisingly, I ate most of the batch myself.) 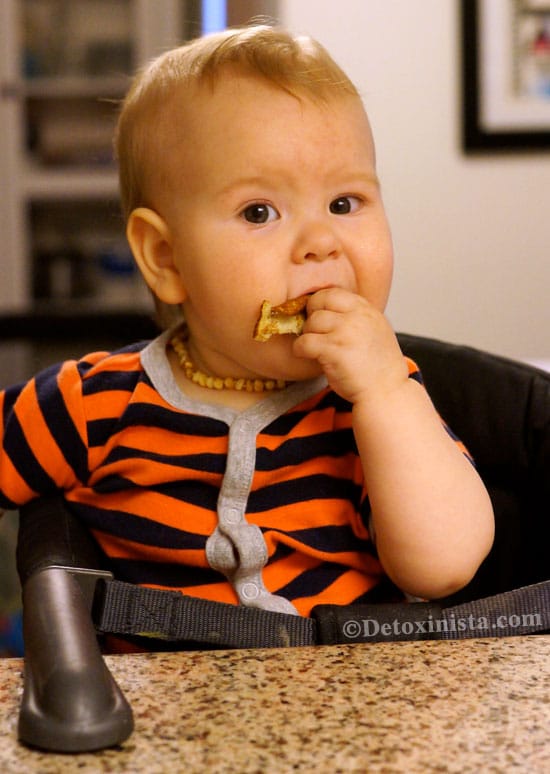 This brings me to the topic of Baby Led Weaning. Some parents choose to forgo the purees all together and dive directly into letting their child self-feed with finger foods. The idea is that the child learns how to chew before they swallow, which makes a lot of sense when learning how to eat!

However, it does come with its own set of challenges:

It’s the gagging that I have an issue with. Shortly after feeding our boy that pancake, he gagged on a teeny-tiny piece… to the point that he ended up vomiting. It’s SCARY to watch this happen, but it’s also important that you don’t panic or overreact– you don’t want to make things worse by scaring your child and potentially making him choke. He was fine in a matter of seconds, but I was shaken up for the rest of the day.

After that recent episode, I’m taking a step back from the finger foods for a couple of days and will be enjoying the method of feeding that my son and I both prefer: purees! 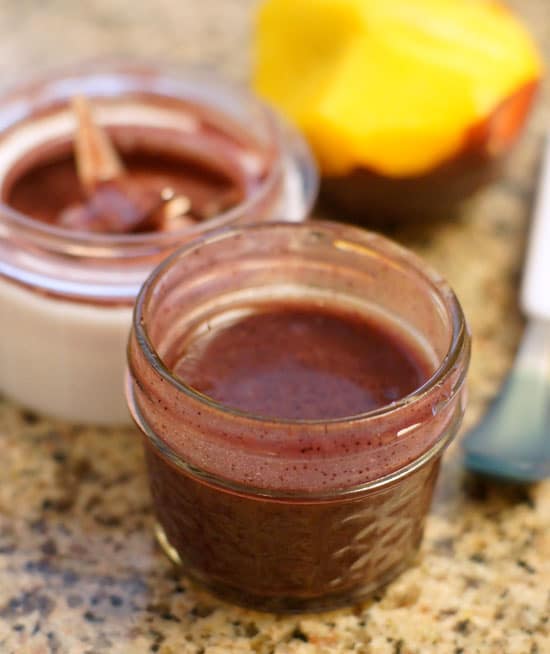 For the first month or so, I had to sneak a small spoonful of puree into my baby’s mouth when he smiled or laughed– he would not open it up for food. Once he started willingly opening his mouth to eat, things got a lot more fun!

With purees, we started with single fruit blends first, to rule out any allergies. Once we had ruled out a few allergies, we would combine a food we knew he could tolerate with a brand-new food, keeping in mind the 4-day-rule I mentioned above. For example, once we knew he could tolerate banana, we’d blend it with blueberries to introduce them– and we wouldn’t introduce another new food for 4 days. After that, we might add something like romaine or spinach to the mix!

Some of our favorite combinations, so far, include:

We started with pretty liquid-y purees at first, using breast milk or water to thin them out, but now we’re making thicker purees to get our guy accustomed to more textured food. Avocado and fresh young Thai coconut meat are helpful with that, making his food more like a pudding, plus they add a nice dose of healthy fat.

For happy eating, it’s also essential that my son has something in his hands to occupy himself. His favorite options include one of our regular spoons or a soft straw. I’ll also let him play with a piece of finger food while I’m whipping up his puree, such as pea-sized sliced blueberries or bananas– but those rarely ever make it into his mouth. 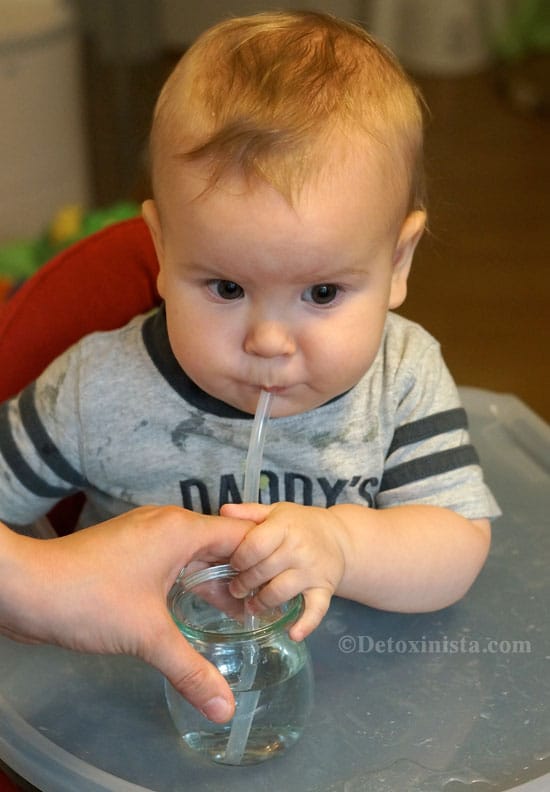 As far as liquids go, other than breast milk, the only other drink he gets is water. No juice and no cow’s milk, or milk alternatives. (The way I see it, they just aren’t necessary while he’s still breastfeeding.)

So, that’s an update on the baby food front so far. We have yet to introduce grains, dairy, or animal protein yet, but I’m in no rush. Our guy is getting all the nutrition he needs from breast milk, so once he shows more interest in finger foods, we’ll start to experiment with more food groups.

Reader Feedback: I’d love to hear from other parents regarding your own experience with baby foods! What was your baby’s first food? And their favorite foods?