Toddler » Motherhood » What I Ate: With a Picky Toddler
Toddler · What I Ate

How is it Wednesday already? Post-holiday weeks usually feel slow to me, but for some reason this one is flying by!

As usual, I’m still trying to figure out how to get my picky toddler to eat a larger variety of foods. As you may recall, he used to be the BEST eater as a 12-month-old and 16-month-old. He’d eat almost any food I put in front of him, until he turned 2. It’s like he knew he was supposed to become a “picky toddler” overnight. 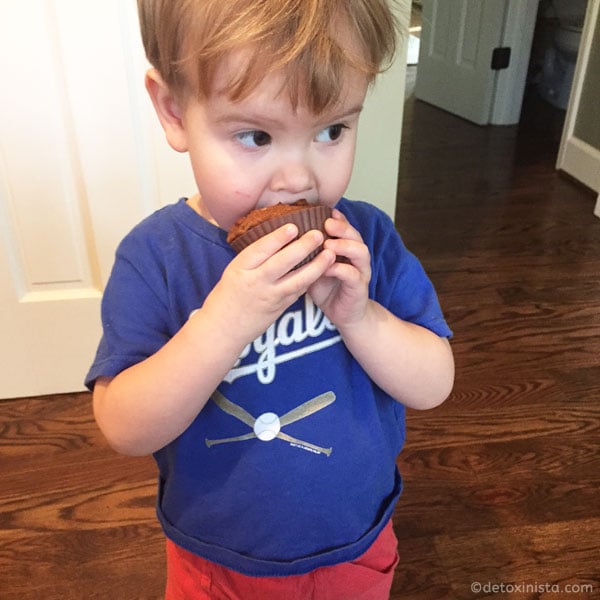 If it were up to him, my son would only eat grilled cheese sandwiches, toast with nut butter, and peanut butter oat balls. I had hoped he would just grow out of it, but after nearly 4 months of letting him have these things on a regular basis, we finally decided to just cut him off! We no longer keep bread in the house, so he has no choice but to eat more nutrient-rich options. And you know what? I think he only whined about it once– I was afraid it would be a much bigger tantrum!

Now, his favorite options include applesauce, goat’s milk yogurt, fresh fruit, raw tahini by the spoonful (weirdo), smoothies, raw cheese, and anything he sees me or his dad eating. We do let him have a grilled cheese or toast if we go to a restaurant over the weekend, but it’s nice to have it limited to once a week so I can squeeze in more nutrient-dense foods the rest of the time!

Here’s a peek at what our days have looked like lately:

Morning: I usually try to start the day with fresh fruit or smoothies, and sometimes both! This week, my son has been asking for “ice cream” (which is what he calls goat yogurt) but I had run out, so I offered him “green ice cream” instead– a.k.a. a smoothie in a bowl. These days he has only been taking a few sips of smoothies before losing interest, but somehow when I put them in a bowl they become magically more appealing! He requested two bowls before he was ready to move on, so I’ll consider that a huge win! I had to eat my smoothie from a bowl, too, which was a nice change.

Later, I ate an entire box of fresh raspberries, hoping he’d want one, but he hasn’t quite warmed up to those yet. I also cut-up two pears which are much more appealing to the little guy, and I think we both ended up eating a whole pear each.

Afternoon: For lunch, I made a large salad topped with strawberries, cucumbers and avocado, topped with a shallot dressing from my cookbook. Followed by a veggie “hash” topped with baked eggs. (I bake them long enough so that the yolk isn’t runny– I hate runny eggs!) My son wanted his own plate of the hash, but I think most of the bites he took were only pretend…

Late Afternoon: I had to run to the grocery store, and ended up making an impulse purchase of pre-cut watermelon as a car snack for the drive home. I ate almost the whole container before I parked in my driveway! We also had to sample a new attempt at a banana “cream” pie that I had made the evening before. (It was honestly just okay– not great.)

Dinner: For dinner, I whipped up a batch of my One Pot Quinoa Fried Rice, a recipe which will be in my next cookbook (the new book is focused on all things fast and easy, because that what I need these days). It’s so hearty, and my son will even eat it– so that’s saying something.

On days when my son won’t eat the dinner offered, we still try to insist that he sit at the table with us and eat an orange (or whatever fruit is in the bowl on the table) or some sliced raw cheese. He’s happy with both of those options, and it’s no extra work in the kitchen for me. Win win.

Reader Feedback: What are YOU eating this week? If you have a kid(s), what are their favorite foods to eat these days? I’m always looking for new ideas and tips!