In lieu of my usual “What I Ate” post, I’m sharing a peek at what my son has been eating lately. 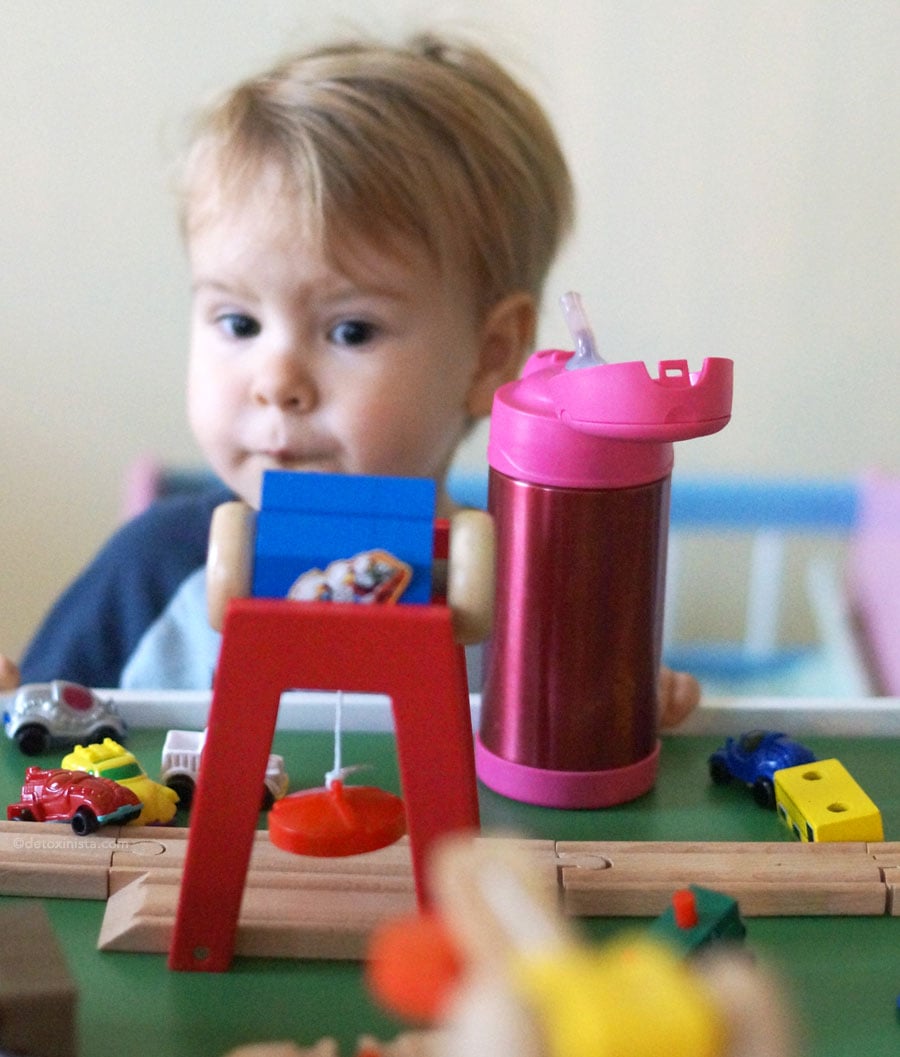 I am asked about what my son eats a lot, and while I was pretty militant about his diet for the first two years of his life, I’m also doing my best to loosen the reigns a bit when I feel it’s appropriate. While I think a healthy diet is important, I also feel that it’s important to not create issues around food. I spent far too many years of my own life stressing about what I ate, and I wouldn’t wish that on anyone.

So, I wanted to share what we’ve been doing lately. When we’re at home he still eats a very clean diet because those are the only options he has in our home– we don’t have candy, cookies, sodas, or processed snacks in the house, so it’s not even an issue. However, when we dine out with him (which is only once every week or two, because going to a restaurant with a toddler is NOT fun) I let him share bites of whatever Austin and I eat.

For example, this past weekend we went to lunch with some friends at an Italian restaurant. Everyone was indulging in the soft, crusty bread dipped in oil as an appetizer, so I let my son have a little bit of the bread and oil, too. I did try to moderate his consumption by giving him teeny-tiny pieces, but he certainly felt like he was getting a special treat! And then he shared my creamy tomato soup and chopped salad as our main dish. I do still bring food for him to restaurants, in case he doesn’t like the food I order. Usually it’s a smoothie in his favorite travel cup, and a few date energy balls.

Here’s a peek at what he’s been eating at home this week: 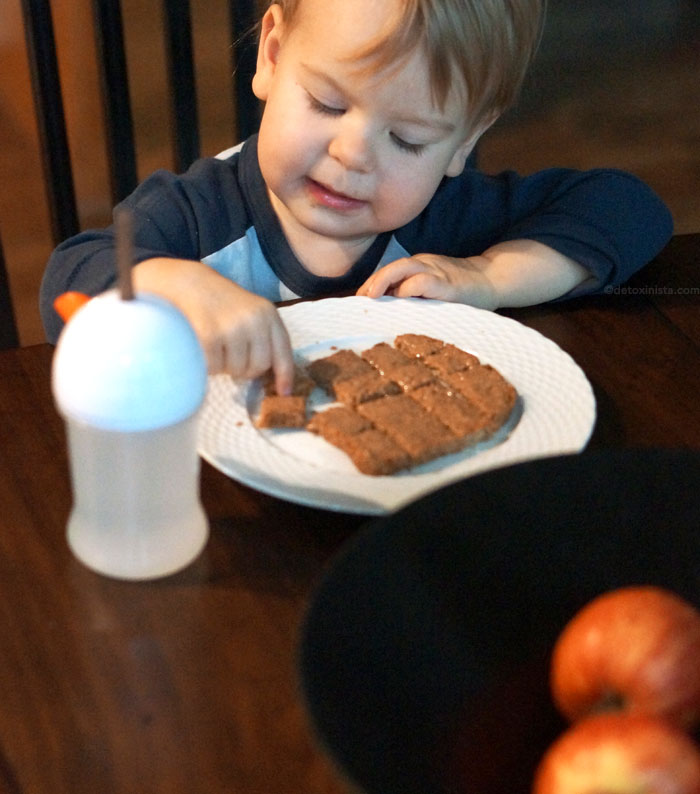 Breakfast: TOAST! That’s usually what I hear when he wakes up each morning. “Toast? Toast, Mama?” He’s obsessed. I’ve challenged this addiction by telling him that we’re out of toast somedays… and he survives just fine… but this week I’m giving into it. Yesterday he had two pieces of sprouted toast topped with almond butter, along with a green smoothie. Just a couple weeks ago he would have shared a big batch of our Chocolate Superfood Shake, but this week he has decided he doesn’t like chocolate anymore. This week, his shakes have to be GREEN in color. What a picky guy. 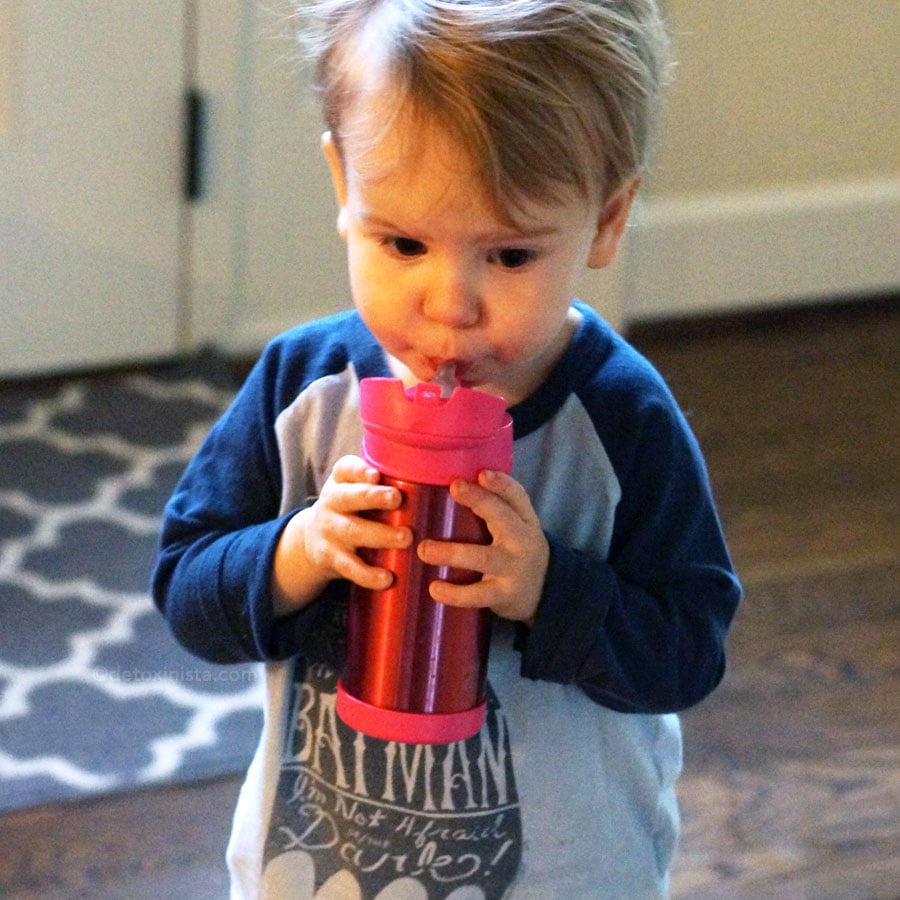 Snack: More smoothie. I make a big batch each morning, and lately he’s been having anywhere from 24 to 30 ounces of smoothie each day. Yesterday, his smoothie included young coconut meat (I buy the frozen kind), mango, strawberries, spinach, dates, and a clementine. Any fruit he doesn’t finish at breakfast usually gets thrown into his smoothie, too.

Note: You can see more of my favorite toddler smoothie combos in this post. 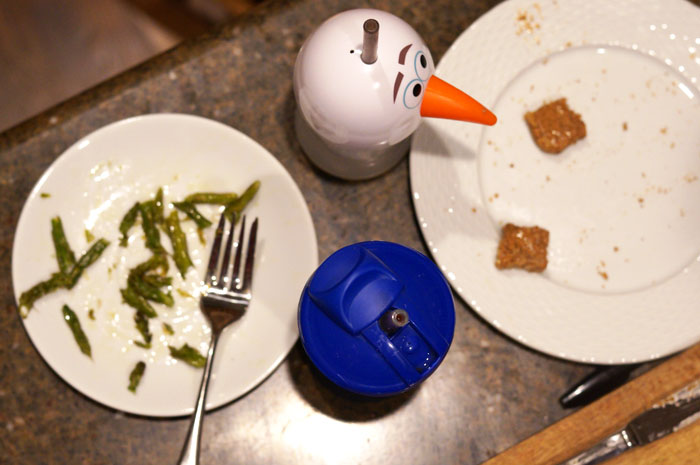 Lunch: Another piece of almond butter toast, along with half of a chopped apple. (Here’s a trick I use: I keep fresh apples in a bowl on the table and I don’t ever offer them to him– somehow, this makes them desirable and he always asks for one. It works with every fruit I’ve tried so far!) I also offered him some leftover salmon and asparagus, but he only took two bites before asking for some “green shake.” Thank goodness for smoothies. 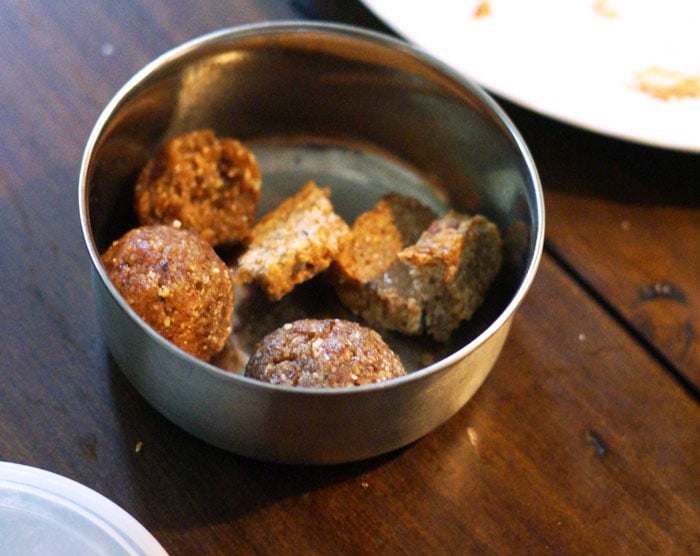 Snack: When we run errands, I always throw a couple of his favorite “nacks” in a container to take with us, along with any leftover toast from his plate. He almost always polishes them off in the car. 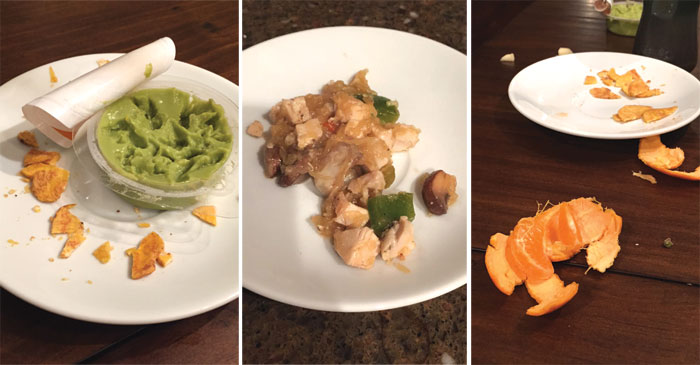 Dinner: Okay, I lied. We do have chips in the house sometimes: roasted plantain chips! My son is obsessed with them, so I try to limit their appearance in our home, but he eats them with a lot of guacamole which seems like a good thing. I keep single-serving guacamole and hummus packs in our fridge for snacking on-the-go, and sometimes I’ll let him snack on one while I make dinner. (Costco sells the cleanest organic hummus and guacamole I’ve found!) So, he started off with plantain chips and guacamole, followed by a small serving of our dinner– an experimental spaghetti squash dish with peppers, mushrooms, and chicken. He ate two bites, but then he saw that I had filled our bowl on the table with clementines, so he asked for one of those and devoured the whole thing. I’ll consider that a win.

(Oh, and should I mention that we’re also still breastfeeding? My son still nurses three times a day, though I think it’s mostly for comfort at this point. I’m hoping he’ll want to naturally wean sometime soon, but my own mother didn’t cut me off until I was 3 years old. So, I’m trying to pay it forward!)

The foods my son likes seems to change on a daily basis, so you can see more food ideas here, along with a peek at how he ate before he turned two. This week he wants nothing to do with meat, eggs, fish, or cheese, but other weeks he wants cheese at every meal and he’s been known to totally devour the Maple Glazed Salmon from my cookbook. I think the toast cravings have to do with teething– he’s almost done getting his two year molars, and I think the crunchy toast feels good on his gums!

For more baby feeding ideas, you can see how we first introduced solid foods to our son, the Do’s and Don’ts of baby food, and my favorite feeding essentials.

Reader Feedback: Do you have picky kids? What are their favorite foods lately?