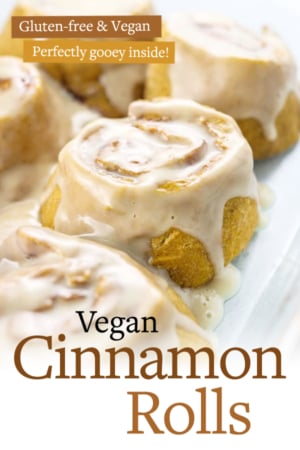 These Gluten-Free Cinnamon Rolls are life-changing. They have a soft and gooey center, and when you top them with your favorite icing, I think they’re totally irresistible. 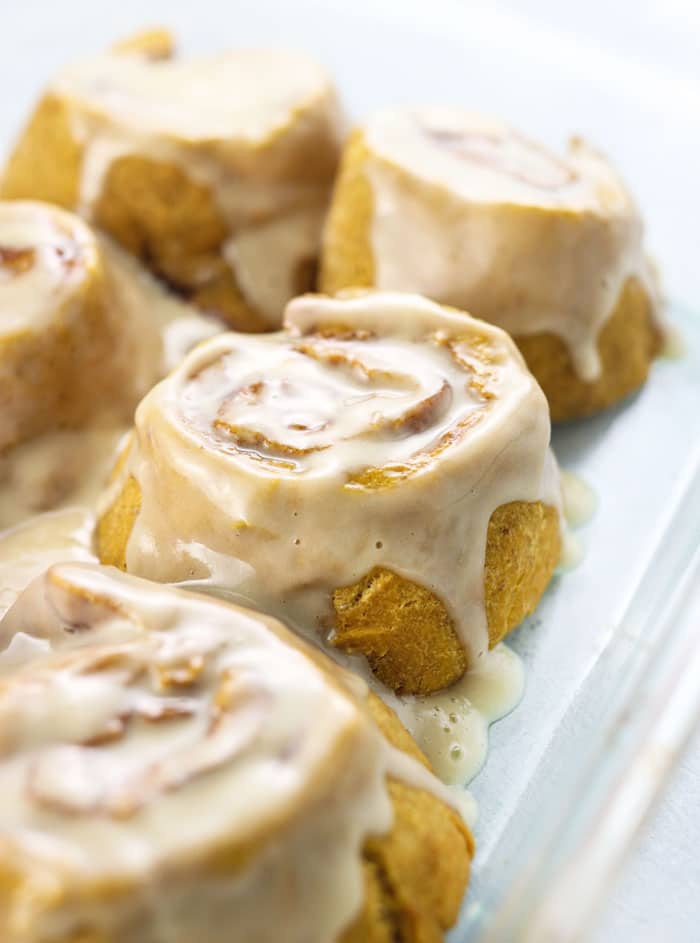 My standards are pretty high when it comes to cinnamon rolls, which is why it took me an embarrassing number of attempts to get these just right. My family has always made Paula Deen’s recipe at Christmas every year, but I wanted to see if I could create gluten-free and vegan cinnamon rolls that resembles hers. I think this recipe is pretty darn close!

I tried making my own gluten-free flour blend for my first round of experiments, but I soon discovered that it was WAY easier and more convenient to use a mix that you can simply pick up at the store. 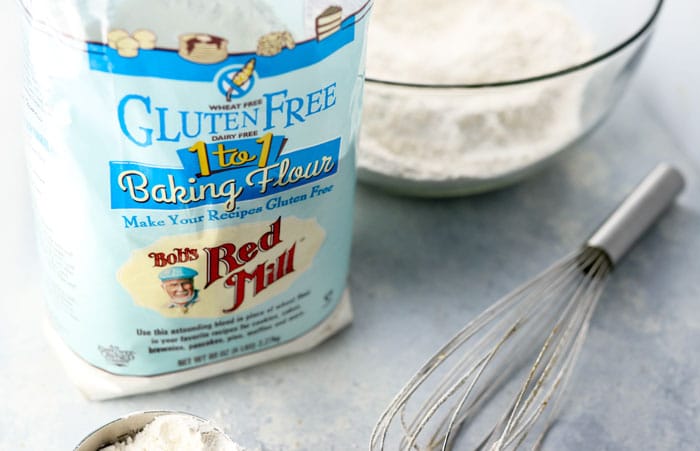 I settled on Bob’s Red Mill 1-to-1 Gluten-Free Baking Flour because it’s available almost everywhere and works really well. If I can find it at my local Target and regular grocery stores here in Kansas, I feel like most people will be able to find it elsewhere, too.

(Do not mistake this blend for Bob’s Red Mill All-Purpose Gluten-Free Flour… which tastes terrible, in my opinion. It has to be the 1-to-1 Baking Flour!)

I also added some ingredients that you don’t normally see in a traditional cinnamon roll recipe, like ground chia seeds and pumpkin puree. These things greatly improve the texture of the cinnamon rolls, so please try this recipe as written before making any changes. 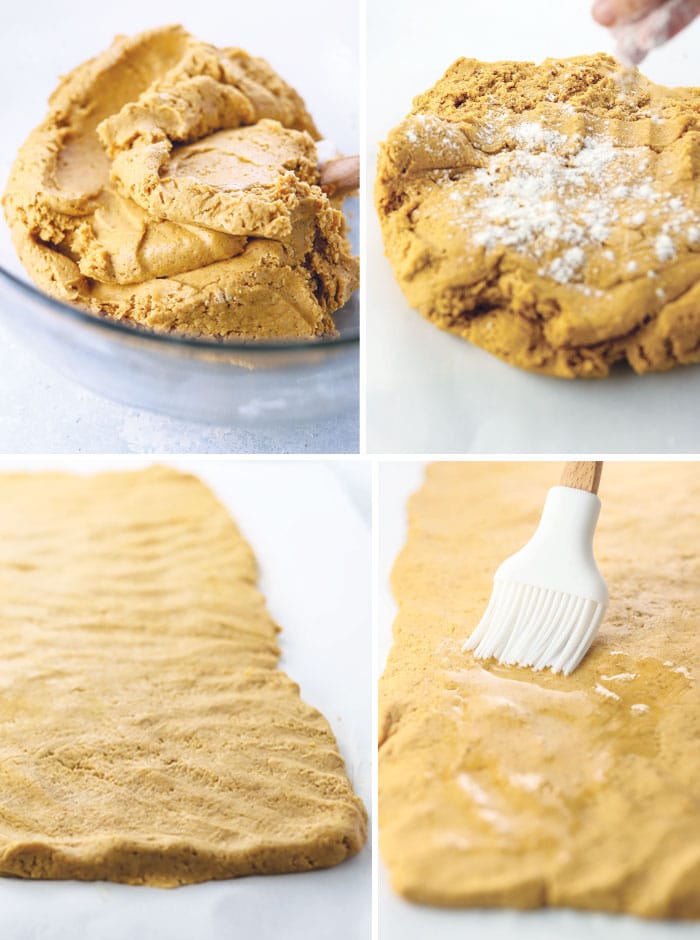 Trust me when I say I’ve tried this recipe without them, and these two extra ingredients make a world of difference. (The extra nutrient boost doesn’t hurt, either!) Rather than tasting like a “pumpkin cinnamon roll” I think these taste like they were made with a whole wheat pastry flour, which is still pretty good when we’re talking about gluten-free baked goods. (Some gluten-free recipes taste downright awful depending on the flour blend you use.)

The trickiest thing I’ve found with working with cinnamon rolls is the yeast aspect. My favorite cinnamon roll recipe uses yeast, so I knew I’d need to use it for an authentic copycat, too. However, what I didn’t know is how many things can go wrong with yeast. (Fact: This is the ONLY recipe on my website that calls for active yeast. And it will probably stay that way!) 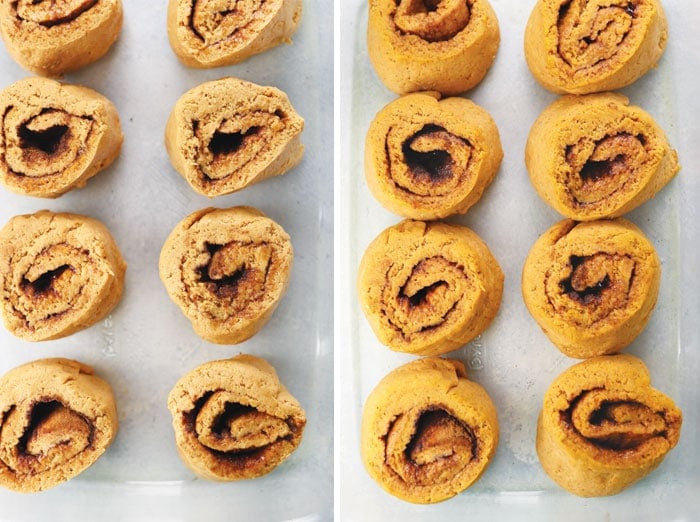 Here are some tips to help you work with yeast and avoid common mistakes: 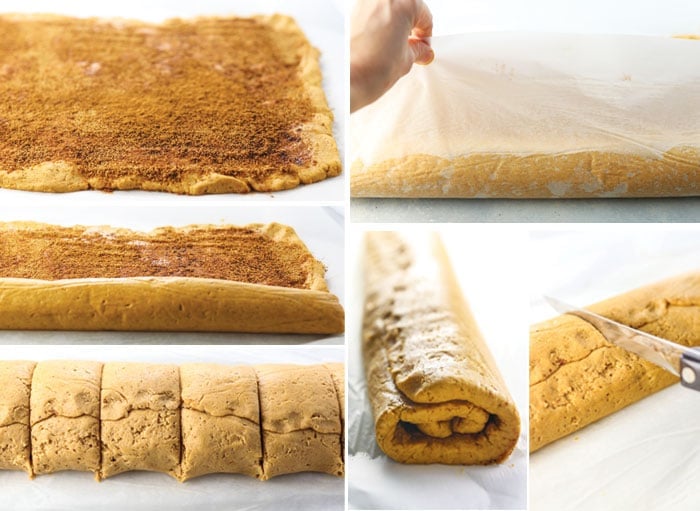 When pressing out the cinnamon roll dough, be sure to line your countertop with parchment paper (or even plastic wrap), as it will help you roll the dough easily. I use this method for making ANY type of cinnamon roll, because I find all the “good” doughs are usually somewhat soft and fragile.

A perfect cinnamon roll dough should be slightly sticky to the touch, without being wet. You’ll need to sprinkle a little flour on the top of the dough while pressing it out to help prevent it from sticking to your hands. Don’t be tempted to add too much extra flour to this recipe, as gluten-free flour is very drying and will result in more dense, biscuit-like rolls.

If you ask me, cinnamon rolls are always the very best when you make them fresh, but if you’re feeling rushed for time, you can also make these ahead of time. There are two ways to do it:

Can You Make Gluten Free Cinnamon Rolls with No Yeast?

Yes, you can. You can leave the yeast out of this recipe and bake them as directed, with more dense results. Keep in mind that yeast makes cinnamon rolls light and fluffy, so when you leave it out the result is more dough-y in texture and the cinnamon rolls won’t rise and spread like you might be used to. However, I think these rolls still taste good without the yeast and you won’t have to worry about all the yeast troubleshooting tips I mentioned above.

Just don’t expect a fluffy cinnamon roll when you leave out the yeast.

When you leave out the yeast, I do like to double the baking powder to help add more leavening to the recipe. (And make sure you include the vinegar to help react with the leavening ingredients!) 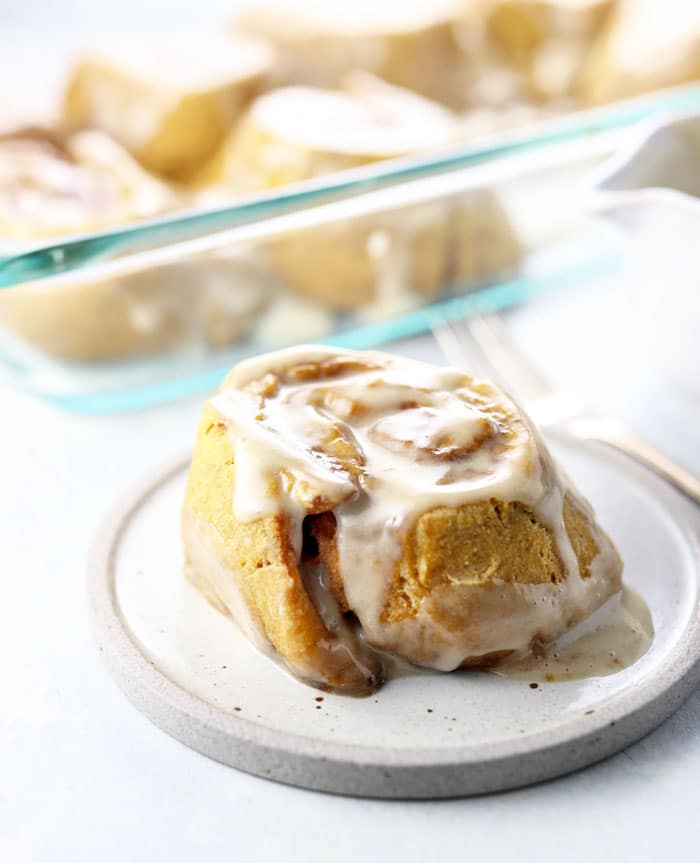 I hope you’ll enjoy these gluten-free and vegan cinnamon rolls for your next special occasion. To keep this recipe nut-free, you can use the powdered sugar icing below (we usually use powdered sugar on Christmas morning!), or to keep these naturally sweetened, try the Maple Glaze option that you see pictured in this post.

I hope you’ll enjoy them! 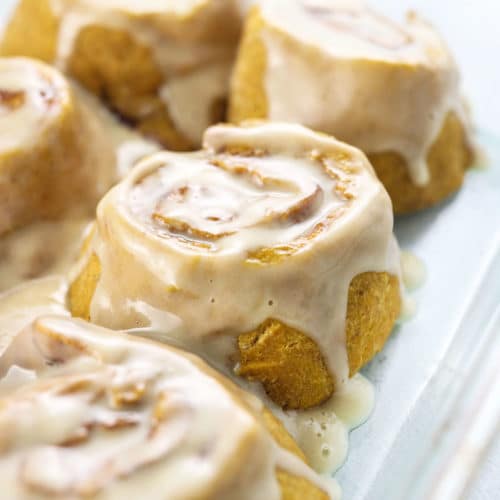 Because these cinnamon rolls are gluten-free and vegan, they do have a slightly different taste and texture from traditional cinnamon rolls. I recommend making a test-batch before making them for a big holiday event, just to make sure YOU like them before attempting to serve them to company!

(This should really be  a rule for any recipe, but I thought it was worth repeating for this recipe– practice makes perfect, so it’s a good one to try ahead of time!)

Reader Feedback: Do you have a special holiday treat that you make every year? I’m so excited to test this one on all of my family members this year!