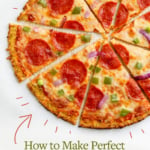 This Cauliflower Pizza Crust recipe is a healthy veggie-packed option that is naturally gluten-free and grain-free. It’s perfect for people who still want to eat their pizza, while following a low-carb or food combining diet. 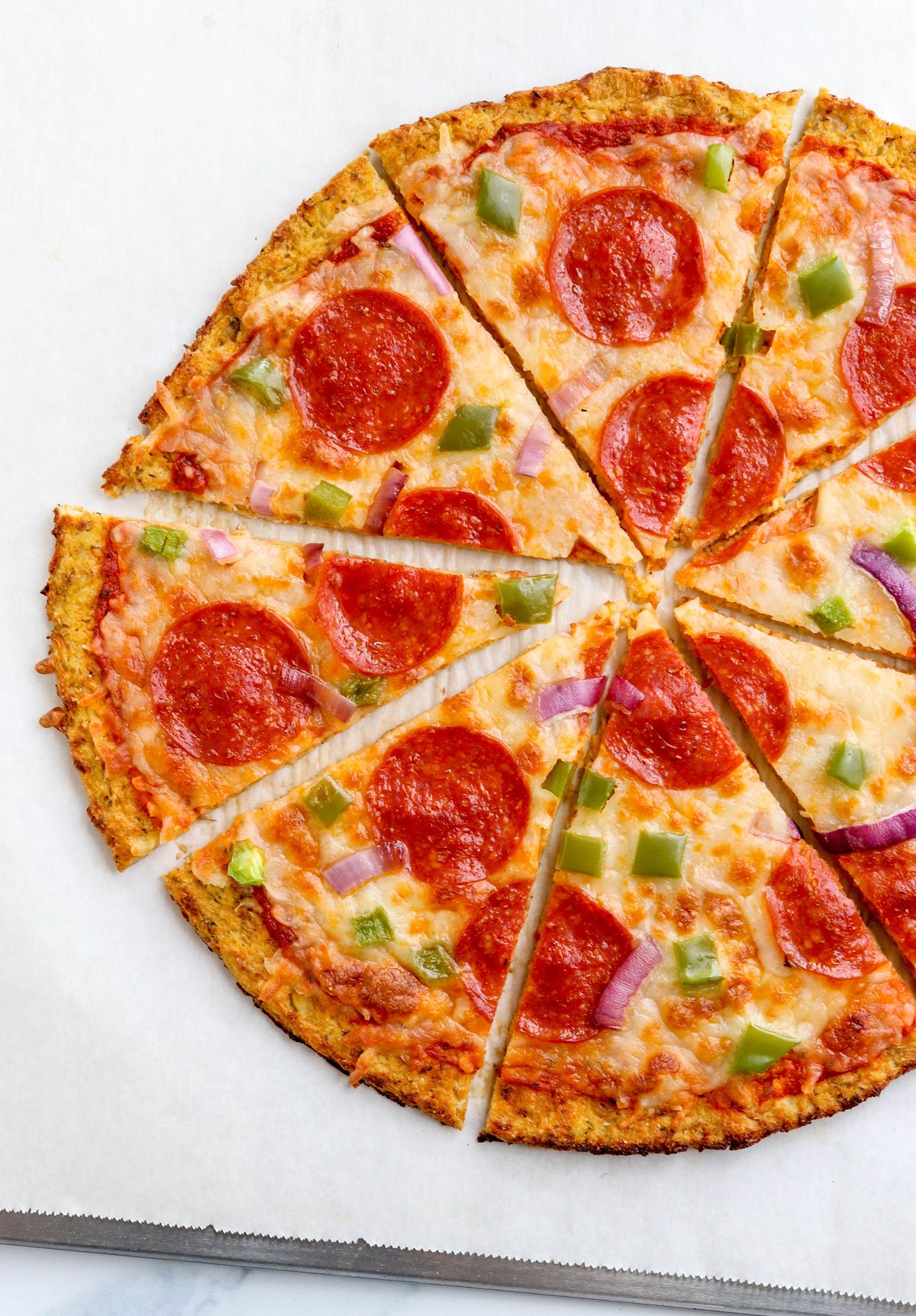 How to Make Cauliflower Pizza

Making cauliflower pizza is straight-forward, but a little labor intensive. If you start with fresh cauliflower, you’ll need to steam it until tender. (You can skip this step by using frozen cauliflower– read further down in this post for more info.) Then, you’ll pulse it in a food processor until it’s rice-like in texture. 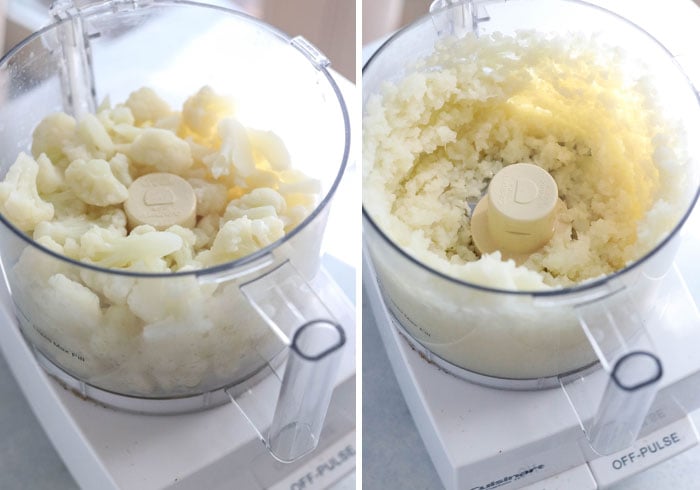 (You can save even more time by purchasing pre-riced cauliflower, either fresh or frozen.)

The Secret to a Non-Soggy Crust

Once your cauliflower is tender and “riced” you’ll need to squeeze out the moisture that cauliflower naturally contains. This is the secret to getting a dry crust that you can pick up with your hands. (I the same nut milk bag that I use to make almond milk to do this.)

Once the cauliflower “rice” is very dry, you mix it with an egg, soft goat cheese (which gives the crust a better texture than using shredded cheese), and some Italian seasonings.

If you don’t have goat cheese on hand, many readers have reported success in the comments below using other cheeses. You can try mozzarella, cheddar, or even cream cheese with similar results. The texture is the driest with the soft goat cheese, though. 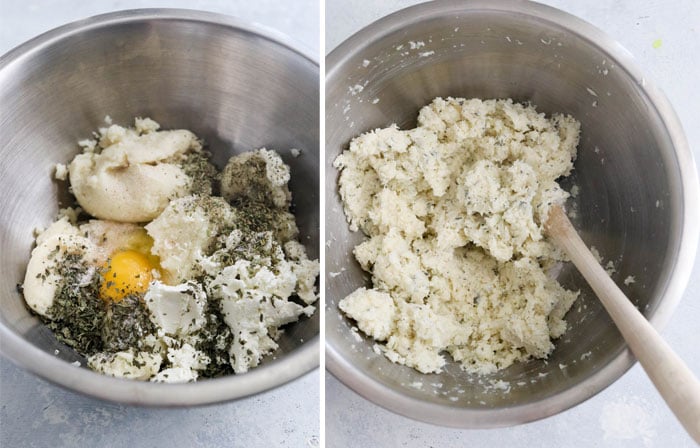 The crust won’t be like anything else you’ve worked with before– you spread it with a spatula, and use your hands to press and shape the dough.

Bake until the crust is dry and golden, then flip it and bake longer until the other side isn’t soggy. I use the parchment paper to make the flipping process easier.

(You don’t need a second piece of parchment paper after you flip it– the baked crust won’t stick to the pan after it’s been flipped.) 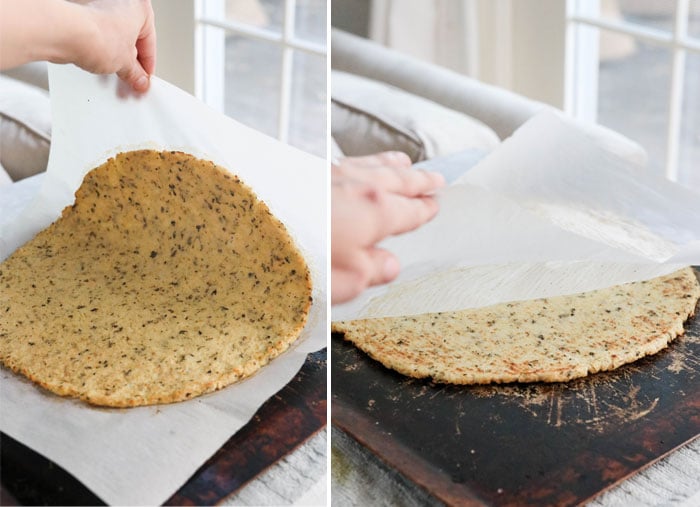 I’ve been making this cauliflower pizza crust for years, and there are a number of ways you can make it, but the easiest method is by starting with frozen cauliflower.

I buy 1-pound bags of frozen cauliflower, so that I don’t have to do any chopping, and then I thaw them in the fridge the night before I want to make my pizza. 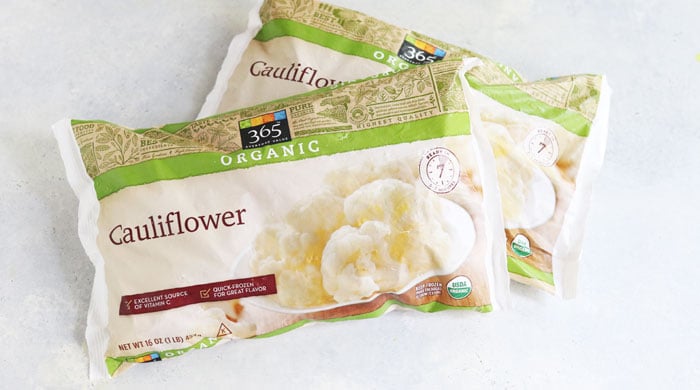 Using frozen cauliflower allows you to skip the pre-cooking of the cauliflower, and ultimately saves you time, but I’ve also included directions for starting with fresh cauliflower in the recipe below if you’d prefer to do that.

You must thaw and squeeze out the liquid from the cauliflower to get a non-soggy crust.

Update: Many stores are also now carrying frozen pre-riced cauliflower, which will save you even more time, since you won’t have to break out the food processor, either.  I’ve made this crust using two 12-ounce or two 16-ounce bags of frozen cauliflower, so know that this recipe is relatively flexible with the cauliflower amount. 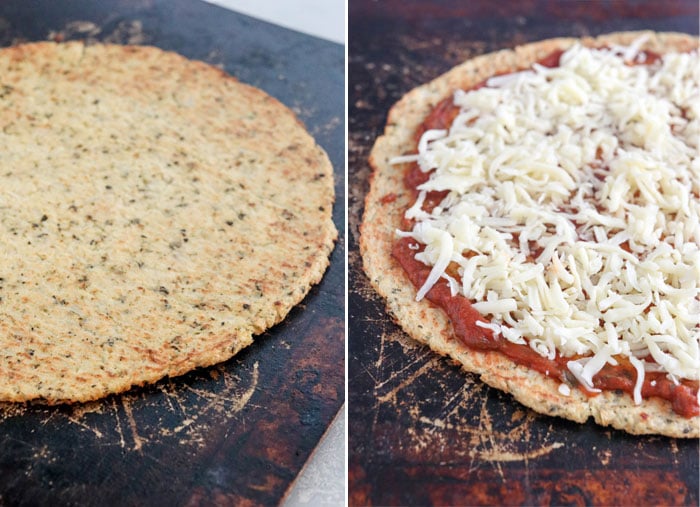 One last thing to keep in mind when making a cauliflower pizza crust is that you should try to keep the toppings minimal. Go light on the sauce, so that it doesn’t re-hydrate the crust and make it soggy, and the same goes for the cheese. (Remember, there’s already some cheese baked into the crust, too!)

How to Make It Without Cheese

If you don’t tolerate dairy well, I’ve made this crust by omitting the cheese and using an extra egg instead. The crust texture is a little “egg-ier” that way, but it still holds up. 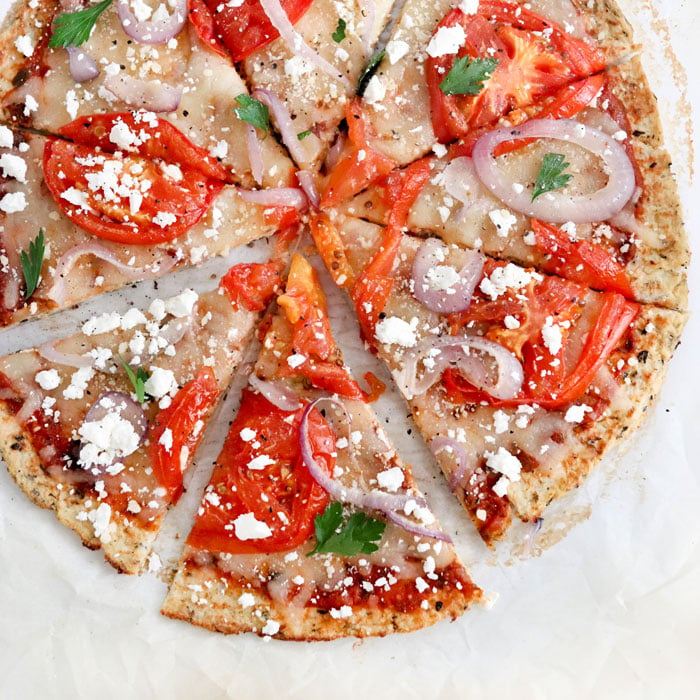 How to Freeze Cauliflower Pizza Crust

Because making a cauliflower pizza crust can be a bit labor-intensive, I like to double the recipe and make two large crusts (or 4 smaller crusts for individual pizzas) and freeze the extras for an easy future meal.

I’ve found that this works best by baking the crusts, and then freezing them in an airtight container. That way, when you’re ready to make a pizza, you can simply place the frozen crust on a pizza sheet and bake it at 400ºF just until it’s heated through, about 10 minutes.

Then add your toppings and bake for 5-10 minutes more, until the cheese is bubbling.

Nutrition information is for 1/4 of the pizza crust, not including toppings. This is automatically calculated, and is just an estimate, not a guarantee. This crust will be the most sturdy when you use only 1 pound of cauliflower florets, but you can use up to 1 1/2 pounds of cauliflower for a larger crust that has a higher veggie content! I usually use two 12-ounce bags of thawed from frozen cauliflower rice to make this a fast & easy as possible, so you can easily use up to 1 1/2 pounds of cauliflower in this recipe. But, if you're buying 1-pound bags of frozen cauliflower, you can use just 1 bag per pizza crust.

If you try this Cauliflower Pizza recipe, please leave a comment below letting me know how you like it. And if you make any modifications, I’d love to hear about those, too. We can all learn from your experience!

I can’t wait to hear what else you try!

Reader Feedback: Have you tried a cauliflower pizza crust yet? 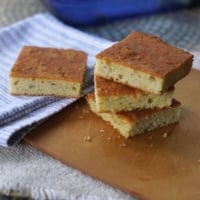 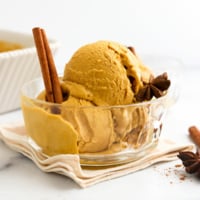 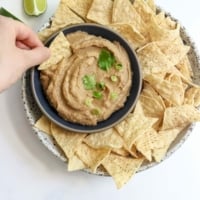 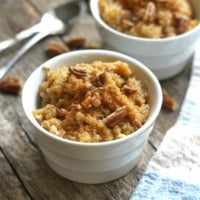