If you already subscribe to my email newsletter, you know that things have been a little crazy in my life lately. Hence, why I haven’t been able to post here as often as I would like to. (Luckily, there is an end in sight!)

One of the things keeping me occupied is the recipe development for my next cookbook. My deadline is quickly approaching, so I’ve been testing 5+ recipes after work each night to make sure that every single one is fool-proof and delicious. (I have an army of recipe testers double-checking them for me, too!) The perk of this schedule is that I always have loads of food in my fridge the next day for quick and easy meals. The con is that I have too much food… but luckily I have lots of friends and family members willing it take it off my hands. 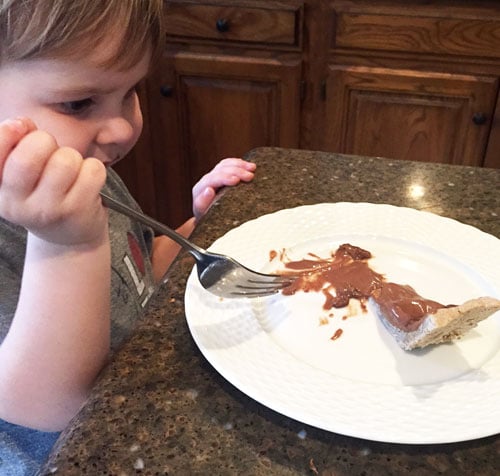 I’ve been grazing on small meals and snacks throughout the day more than I usually do, probably because that’s how my son currently eats. He’s still in a “picky toddler” phase where he’ll only eat food that I don’t offer him… so I have to eat a lot around him to make certain foods look enticing– like fruit, smoothies, and salads. If I offer it to him, he’s not interested. But if I sit there and eat it in front of him long enough, he will almost always ask for a bite. Oh, the silly games I will play to get him to choose to eat well!

I’ve hesitated to share any “What I Ate” posts lately, because I don’t want to tease you with a bunch of recipes I can’t share with you yet. The wait is the hardest part of writing a cookbook! But, I thought a little update was in order, so here’s a peek at what we’ve been eating lately: 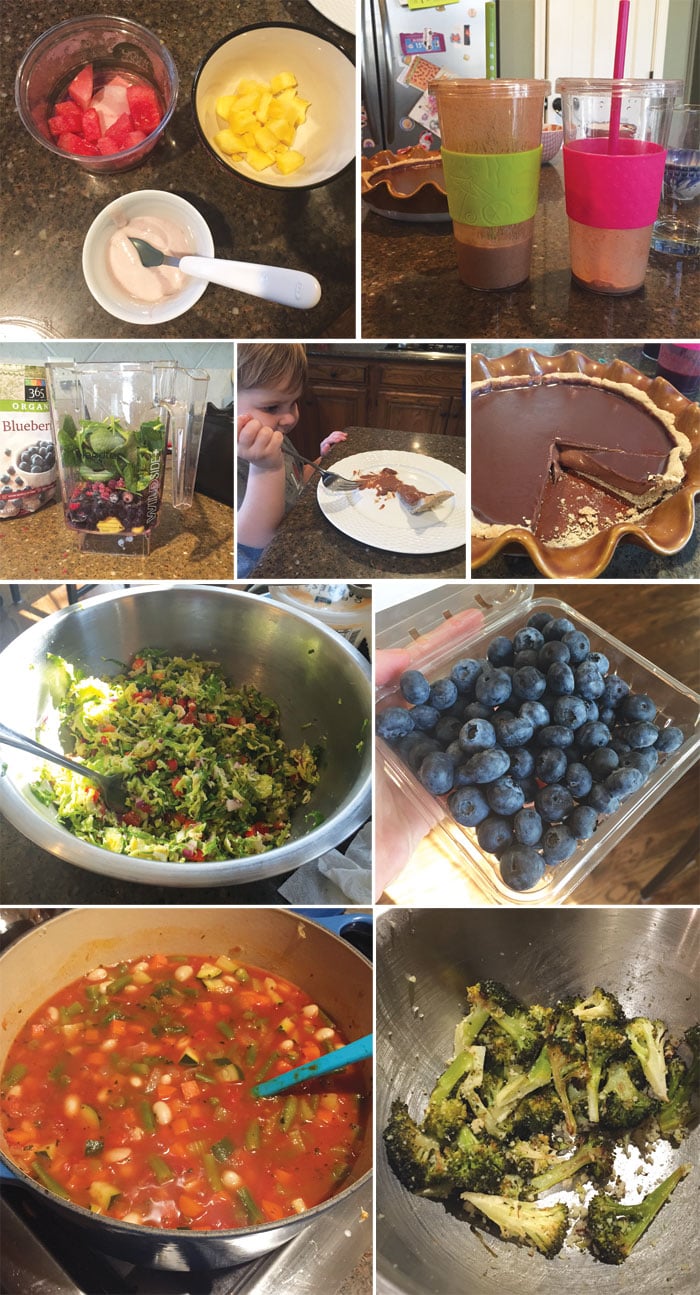 Morning: We always start our day with some sort of fresh fruit. My son just recently decided that he likes pineapple, so that’s an easy option– even if it does start to burn your mouth after too many bites. I also picked up a small container of pre-cut watermelon to see if he would try that… but I ended up eating it all myself. Goat’s milk yogurt is a big hit with the little guy, too, so he almost always has a small bowl of that each morning. (He doesn’t share that one with me. He calls it “ice cream” and apparently it’s a real treat!)

We also make “milkshakes” each morning for the whole family, so my husband can drink his breakfast on the way to work. The Chocolate Superfood Shake (from the preorder bonus pack) is our go-to, although my son prefers fruit smoothies so I usually end up making two different flavors and sipping on whatever he doesn’t finish.

Mid-Morning: I worked on a nut-free pie crust the night before, so I wanted to sample it to see if it worked out. Not surprisingly, I had another little taste tester eager to try the pie! I used my Vegan & Paleo French Silk Pie recipe as the filling, and of course, it was delicious– even if the crust does still need a little work.

Lunch: I made a shredded Brussels sprouts salad the night before, so it was super-tender after marinating in the fridge all night. It’s amazing how much an entire pound of brussels sprouts can shrink! I tossed them with peppers, red onions, and added in a big handful of goat feta crumbles for some extra salty-flavor, and it was amazing. I think I’ll be eating brussels sprouts like this more often! I also made three scrambled eggs to share with my son, but I ended up eating most of them myself. (He used to eat three eggs on his own! It’s amazing how much they can change from month to month…)

Snack: I snacked on an entire box of blueberries, and two pieces of chocolate almond butter fudge. (Similar to this recipe.) My little guy is OBSESSED with the fudge.

Dinner: Last night, I made a hearty Minestrone soup for dinner, loaded with white beans and veggies, along with a side of garlic-roasted broccoli. As usual, I ate half the broccoli directly off the pan before it even made it to a serving bowl for the rest of my family!

I’ve gotten in the habit of not eating dessert at night lately, mostly because my go-to dark chocolate has been keeping me up at night. We’re still breastfeeding over here, which means I’m going on 3 years without caffeine– making my body ultra-senstive to eating even chocolate at night. So, I’ve been sipping on decaf green tea instead, which is perfect while it’s still a little chilly outside anyway.

Reader Feedback: What are YOU eating this week? Oh, and if you have any recipe requests for the next book, NOW is the time to ask! I’m all ears.