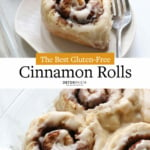 These Gluten-Free Cinnamon Rolls are the best you’ll ever make. They have the perfect texture, and taste remarkably like the real thing, with no gluten required. Your guests won’t even be able to tell that they are eating a gluten-free treat!

Why You’ll Love Them

They have an authentic texture. Gluten-free flour blends tend to create a cinnamon roll with the texture of a biscuit or scone, because they lack the elasticity that gluten provides. However, you can fix this with a magic ingredient: psyllium husk! (More details below.)

They taste amazing! Since cinnamon rolls tend to be a special holiday treat, I’m sharing all the tricks for making them taste better than the ones you’d buy from a bakery. This includes a caramelized base and a melt-in-your-mouth powdered sugar frosting, but I’ve also included options in the notes, if you prefer to avoid using refined sugar. (We make them with brown sugar and melted butter for Christmas morning.)

They are tested and perfected. If you’ve been disappointed by other gluten-free cinnamon roll recipes, this is the recipe for you. I’ve tested over 30 batches of cinnamon rolls to make sure these are the BEST in both taste & texture. Just be sure to use the exact ingredients called for, and read the substitution notes if you need to make them dairy-free or vegan.

You’ll need to use a gluten-free flour blend that includes xanthan gum for this recipe to work, and I recommend using Bob’s Red Mill 1-to-1 Baking Flour (in the blue bag) since that’s what I tested this recipe with.

Curious about psyllium husk? This magic ingredient will take your gluten-free baking to the next level. (It’s a common fiber supplement that I stir into water most mornings!) You can easily find this ingredient at grocery stores in the supplement section, online, or in a health food store. This recipe calls for whole psyllium husks, not psyllium husk powder, so be sure to check your packaging. It should look like ground flax seed, only lighter in color.

How to Make the Best Gluten-Free Cinnamon Rolls

Let the yeast mixture rest for 5 minutes. It should develop of foam on top, which will let you know that the yeast is good.

In a small bowl, combine the psyllium husks and 3/4 cup of warm water. Stir the mixture together until it starts to thicken. If you’ve ever made a flax egg before, it will look similar, but thicker after resting.

Set the bowl aside until you’re ready to add it in.

In a large mixing bowl, combine the gluten-free flour blend, sugar, baking powder, and salt. Whisk well, to make sure the dry ingredients are well mixed.

Next, add in the egg, melted butter, and the yeast mixture once it has developed the foam on top. Stir well, then add in the psyllium mixture. It will be very thick, but keep stirring until the batter looks uniform, with no visible flour remaining.

Gluten-free cinnamon roll dough will be slightly more moist and sticky than you might expect, but the flour will continue to absorb some of the moisture as it rests.

Transfer the bowl of dough to a warm spot to rise for 1 hour. (A “proof” setting in your oven is ideal, but you can also set the bowl on a low-heat heating pad and cover it with plastic wrap if your kitchen is cold.) The dough won’t double in size, but it should expand.

Once the dough has had the chance to rise, knead the dough to make sure it’s well mixed directly in the bowl. The underside of the dough will be more moist than the top of it is, so it might stick to your fingers slightly. This is okay; don’t be tempted to add more flour.

Transfer the kneaded dough to the center of a large piece of parchment paper on your counter.

Cover the dough with another large piece of parchment paper, then use a rolling pin to roll the dough into a large rectangle, about 11 by 16 inches in size, and an 1/8-inch thick. The extra layer of parchment on top will prevent you from needing to add more flour to the recipe.

Remove the top piece of parchment paper, then pour the melted butter on top and spread it around the rectangle. Sprinkle on the brown sugar and a generous layer of cinnamon. Leave a 1/2-inch of dough at the top plain, so it will be easier to seal the roll later.

Use your fingers to pinch the roll closed, then use a sharp knife (or use unflavored dental floss) to slice the rolls. You should get roughly 10 rolls from this recipe.

Grease the bottom of a 9-by-13-inch baking pan and arrange the rolls in the pan. You can also use two 8 inch cake pans instead.

Place the pan back in the same warm spot, to allow the rolls to rise for a second time, about 1 more hour. They should grow in size and start to fill up the pan. When you have 20 minutes left on the second rise, preheat the oven to 350ºF.

Once the rolls are done rising, bake them at 350ºF for 25 minutes, until the tops look dry. They won’t become quite as golden brown as normal gluten-containing cinnamon rolls, but they should grow in size and fill the pan as they bake.

Remove the pan from the oven and let the cinnamon buns cool for 10 minutes.

While the cinnamon rolls cool, mix together the icing. Stir together the melted butter, powdered sugar, vanilla extract, and water to make a melt-in-your mouth glaze. Or, you can use your favorite cream cheese frosting, or try cashew frosting for a naturally sweetened option.

Serve the cinnamon rolls right away after frosting, or let them rest until you’re ready to serve. They are delicious at room temperature, too! Be sure to transfer them to the fridge and cover tightly if you don’t serve them within 2 hours, though.

Do I have to use psyllium husk?

If you want cinnamon rolls that are similar to the kind made with all-purpose flour, then yes, the psyllium husk is the magic solution. If you don’t mind a cinnamon roll that has more of a biscuit consistency, you can use an extra egg as a substitute for the psyllium gel. (The egg will replace the 3 tablespoons of psyllium plus the extra 3/4 cup water you would mix it with.)

Can I make them naturally sweetened?

Yes, of course! Simply use coconut sugar as a swap for the other granulated sugars in this recipe. The resulting rolls will look a little darker than traditional cinnamon rolls in this case, but they will still taste delicious. For a naturally sweetened frosting, try cashew frosting, or simply drizzle them with a little warm maple syrup before serving.

Can I use a different flour?

Do not use almond flour or coconut flour in this recipe, as this recipe relies on the starches found in gluten free blends (like tapioca starch or potato starch). This recipe was developed using Bob’s Red Mill 1-to-1 Baking Flour, so that will give you the most fool proof results, but you can also experiment with using another gluten-free baking blend. Be sure that the blend you use includes xanthan gum for the best results, and keep in mind that other brands will taste different. (King Arthur’s brand measure for measure blend is not as delicious, in my opinion.) If you prefer to use a regular GF flour, be sure to add 1/4 teaspoon of xanthan gum for every cup of flour you use.

Can I use a stand mixer?

Yes, you can mix this dough together in the bowl of a stand mixer with a paddle attachment, if you prefer. It’s not necessary, though! After the first rise, you should be able to knead the dough with your hands, with just a little bit of the dough sticking to your fingers, and that will give you the same results as using a stand mixer.

Can I make them vegan?

You can easily replace the melted butter with vegan butter or melted coconut oil. (Use refined coconut oil for zero coconut flavor.) To replace the egg, use 1 extra tablespoon of psyllium husk plus an extra 1/4 cup of hot water when you mix together the gel.

Can I make thse in advance?

You can prepare this gluten-free cinnamon roll recipe ahead of time by mixing the dough, letting it rise, and then rolling the cinnamon roll into a log. Tightly wrap the log with parchment paper or plastic wrap, and let it chill in the fridge for up to 5 days. When you are ready to bake the cinnamon rolls, slice them and arrange them in the pan. They will probably need to rise for double the amount of time in that case (likely 2 hours) since the dough is cold, and then you can bake as directed. (I have not attempted to freeze these, so I can’t comment on how that will work yet.) 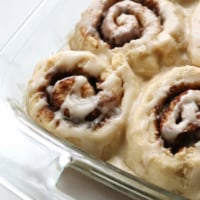 5 from 20 votes
These are the best gluten-free cinnamon rolls in the world! They have the same texture as the kind made with gluten, so if you've been disappointed with other gluten-free recipes, you are going to love these.
Print Recipe Pin Recipe Rate Recipe
Prep Time: 30 mins
Cook Time: 25 mins
Time to Rise:: 2 hrs
Total Time: 2 hrs 55 mins
Servings: 10

• Nutrition information is for 1 of 10 large cinnamon rolls. Feel free to cut the log into several more smaller rolls, if you’d like them to be lower in calories. • You can find whole psyllium husk in the supplement section at most grocery stores, or you can order it online or find it at a vitamin or health food store. Be sure to look for the word “whole” when purchasing this, as it also comes in a powdered form that is more concentrated. It should look similar to ground flax seed, only lighter in color. • I used white and brown sugar in this recipe to make them more like the traditional version we make for Christmas morning. If you prefer to use natural sweeteners all year round, feel free to swap them for coconut sugar. (You can even make “powdered” coconut sugar by blitzing it in a high-speed blender!) • For dairy-free cinnamon rolls: Swap the melted butter for melted coconut oil. I highly recommend using refined, or expeller pressed, coconut oil, so it won’t add a coconut flavor to your cinnamon buns. • For vegan cinnamon rolls: Make the dairy-free swap above, and replace the egg with 1 more tablespoon of psyllium husk + 1/4 cup of warm water as an egg substitute. Look for granulated sugar that is labeled organic, to make sure it is vegan friendly. • The caramelized base and frosting are inspired by Paula Deen. My family has made her original gluten-filled recipe for years! Also, a big shout out to The Loopy Whisk, who has an awesome post on using pysllium husk in gluten-free baking. I was about to give up on having delicious GF cinnamon rolls before I thought to add in psyllium husk!

If you try this gluten-free cinnamon roll recipe, please leave a comment and star rating below letting me know how you like them. 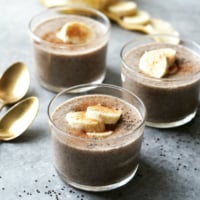 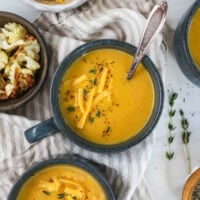 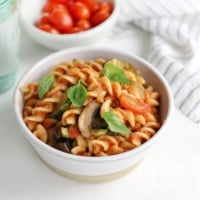 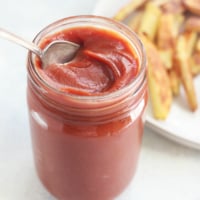