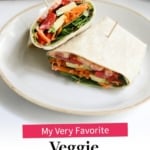 An easy Veggie Wrap is my favorite lunch lately. This healthy recipe is quick to prepare, and makes an easy & filling vegetarian meal. 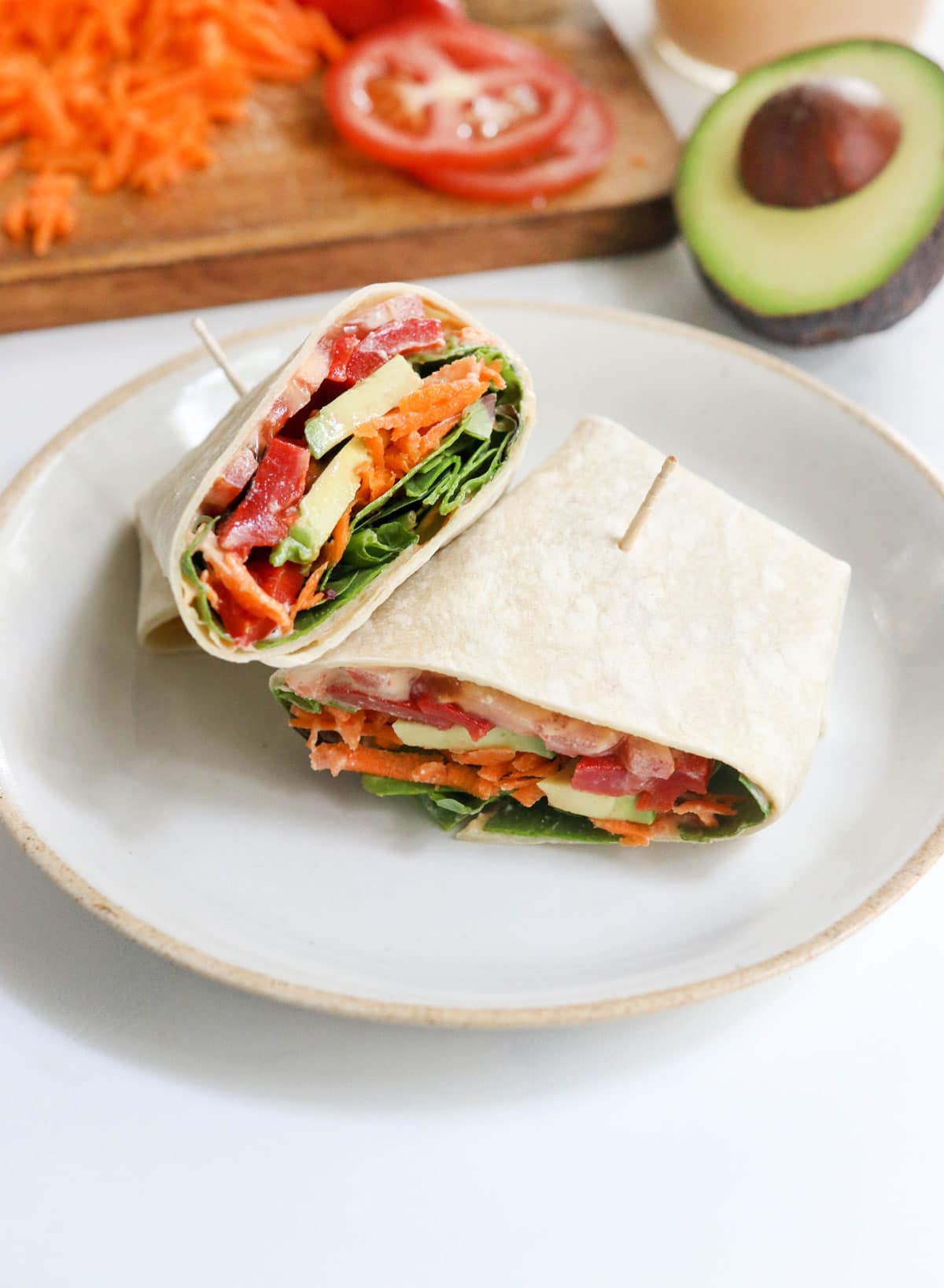 Are Wraps Healthier Than Bread?

Wraps aren’t always healthier than bread, but sometimes it’s just more fun to roll-up your ingredients. If you need a gluten-free wrap option, these are some of my favorites:

If you don’t need a gluten-free wrap, look for one made with whole wheat. (I like Food for Life’s sprouted whole grain tortillas, when I can find them.) Whole wheat tortillas tend to be much easier to work with, so only opt for a gluten-free option if that’s what you need.

Tip: It’s a little easier to roll a gluten-free tortilla if you heat it up first. I like to set the tortilla on a large dry skillet over medium heat, and let it warm up for about 45-60 seconds on both sides. Then it has a little more bend to it, without breaking. 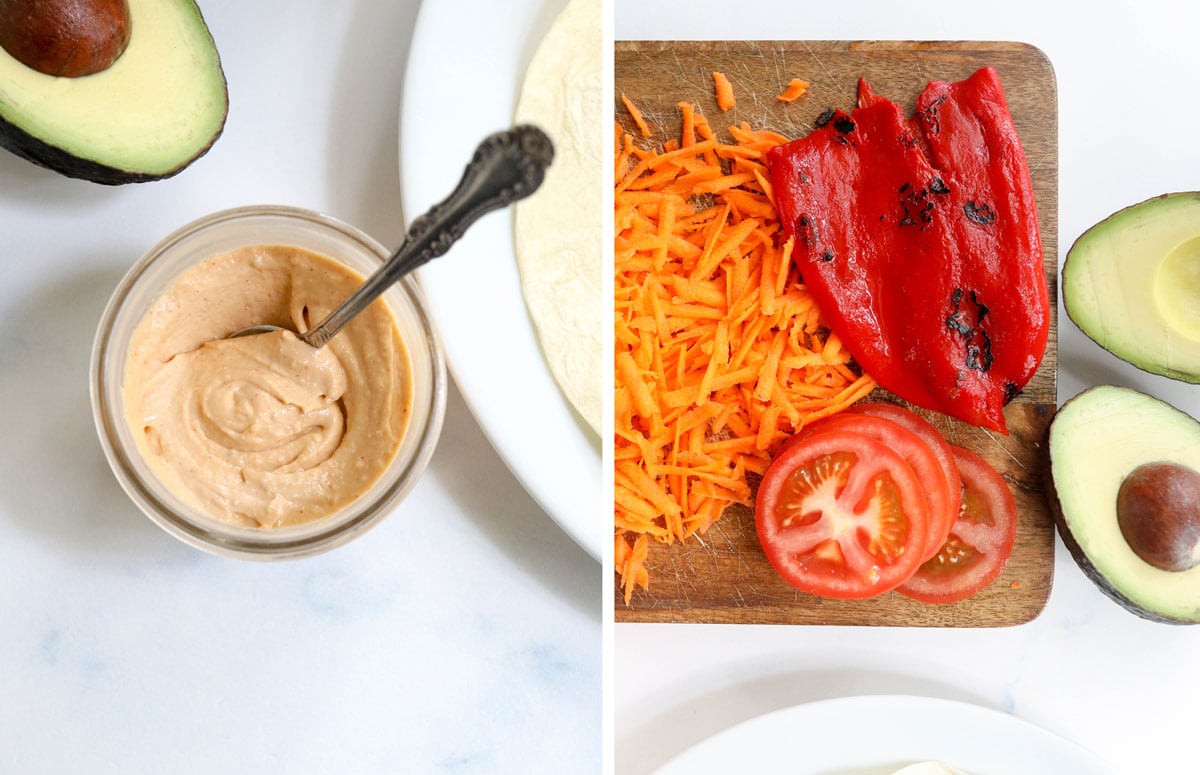 The key to a good veggie wrap is what you put inside, so let’s discuss that. First, you’ll need a really flavorful spread. It helps meld all of the fillings together!

Here are my favorite spreads & sauces:

Next, you’ll pick your veggie fillings. I like to include something crunchy, something soft and creamy, and then I like pack it with leafy greens for extra nutrition.

The combination of creamy avocado, sweet roasted bell peppers, sliced tomatoes, crunchy carrots, and leafy greens. I could literally eat this every day!

When making a veggie wrap, it’s important to not overfill the wrap, or it will be difficult to roll up later. You want to keep the fillings to just one half of the tortilla, so that it’s not messy to hold when you eat it.

Step 1: Start with the Spread

You can add the spread to just one half of the tortilla, or cover most of the surface for more flavor. I’m obsessed with Vegan Sriracha Mayo, so I use it liberally. 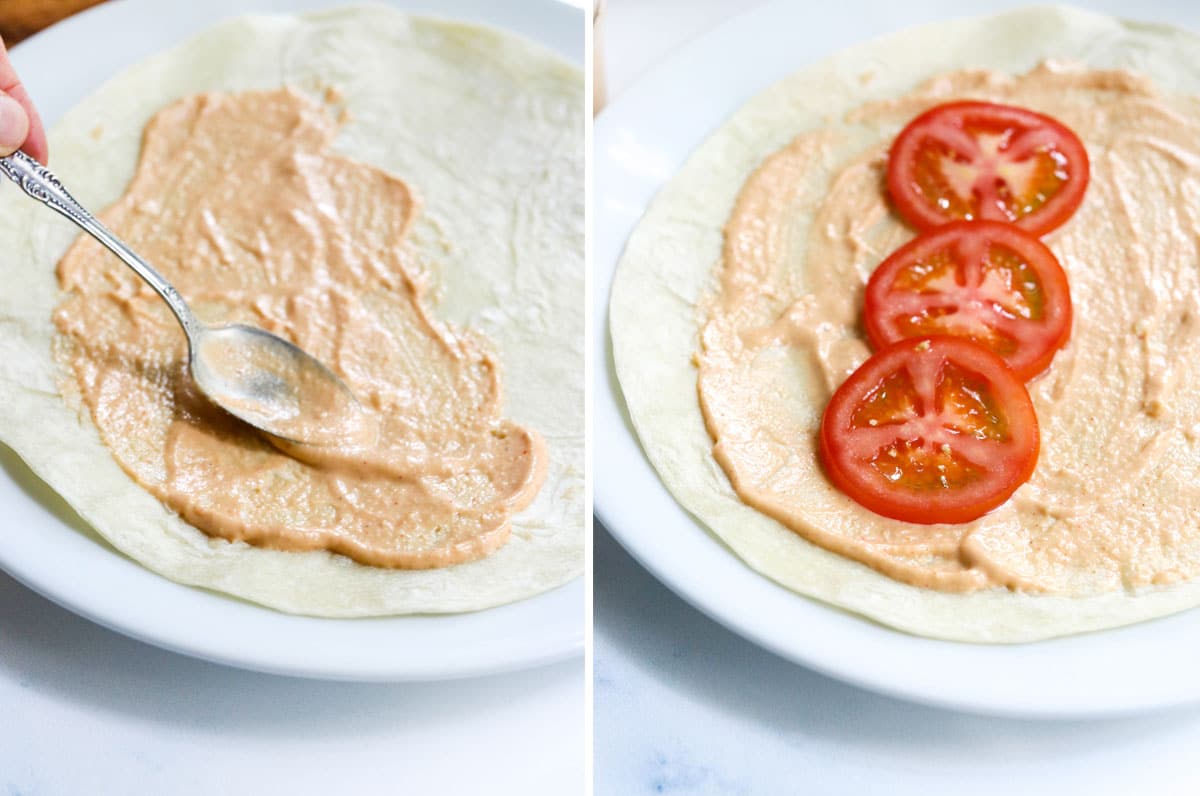 Keep the fillings in a single line, towards the center of the tortilla, so they won’t over-flow your wrap. I like to start with sliced tomatoes and bell peppers. 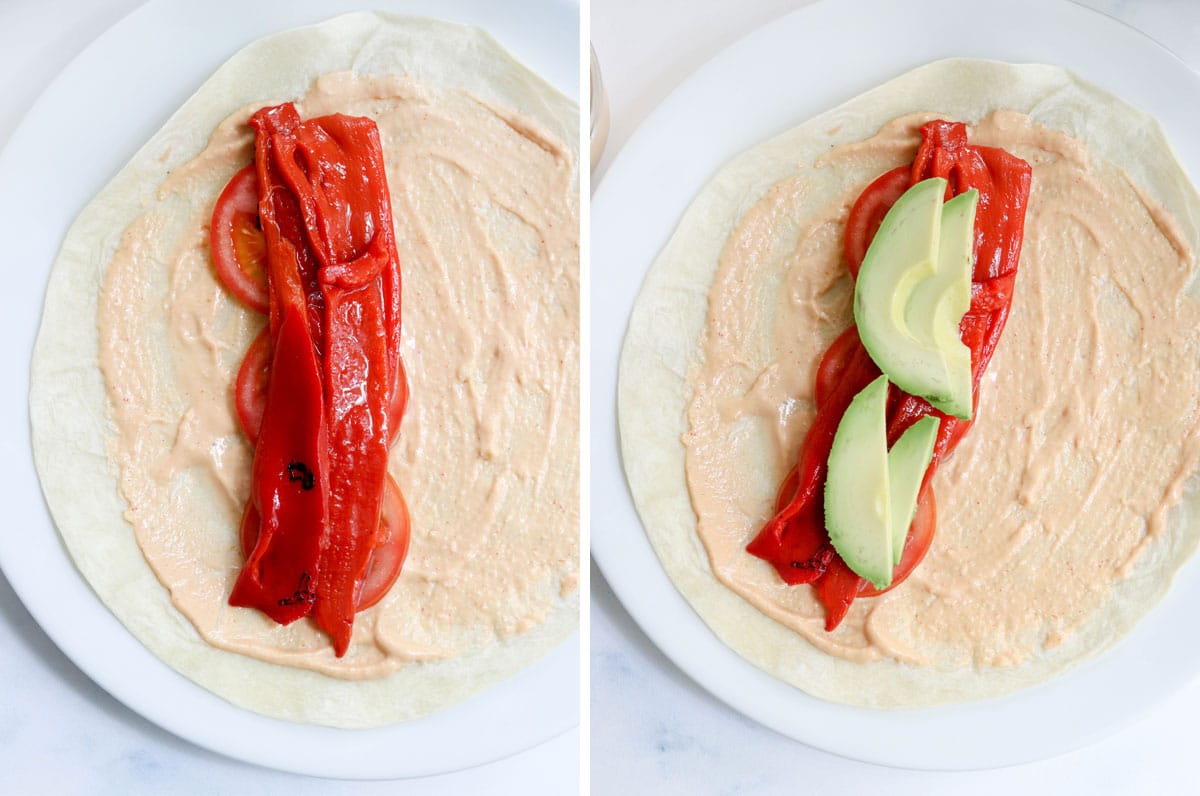 Then add avocado slices and shredded carrots, or any other fillings you prefer.

Adding a handful of mixed greens is always my last step. They aren’t easy to keep in one place, but you can stuff them back into the wrap as you roll it. 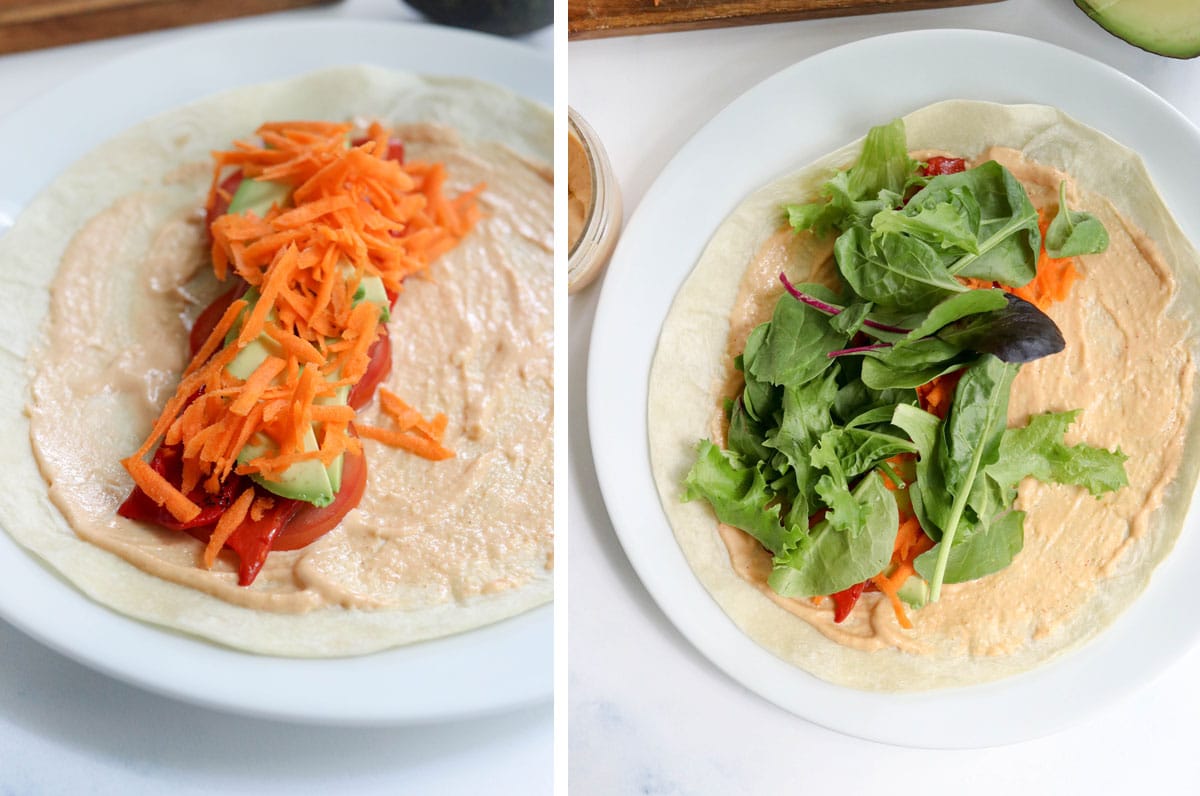 If you’ve ever rolled a burrito before, it’s the same process for a veggie wrap. Start by folding one side toward the middle of the wrap, covering the veggie fillings.

Fold the two sides of the wrap in towards the center.

Continue to roll the folded over tortilla and sides until you reach the other side. It should look like a burrito when you’re done.

Slice the veggie wrap in half, if you’d like to, and enjoy it! 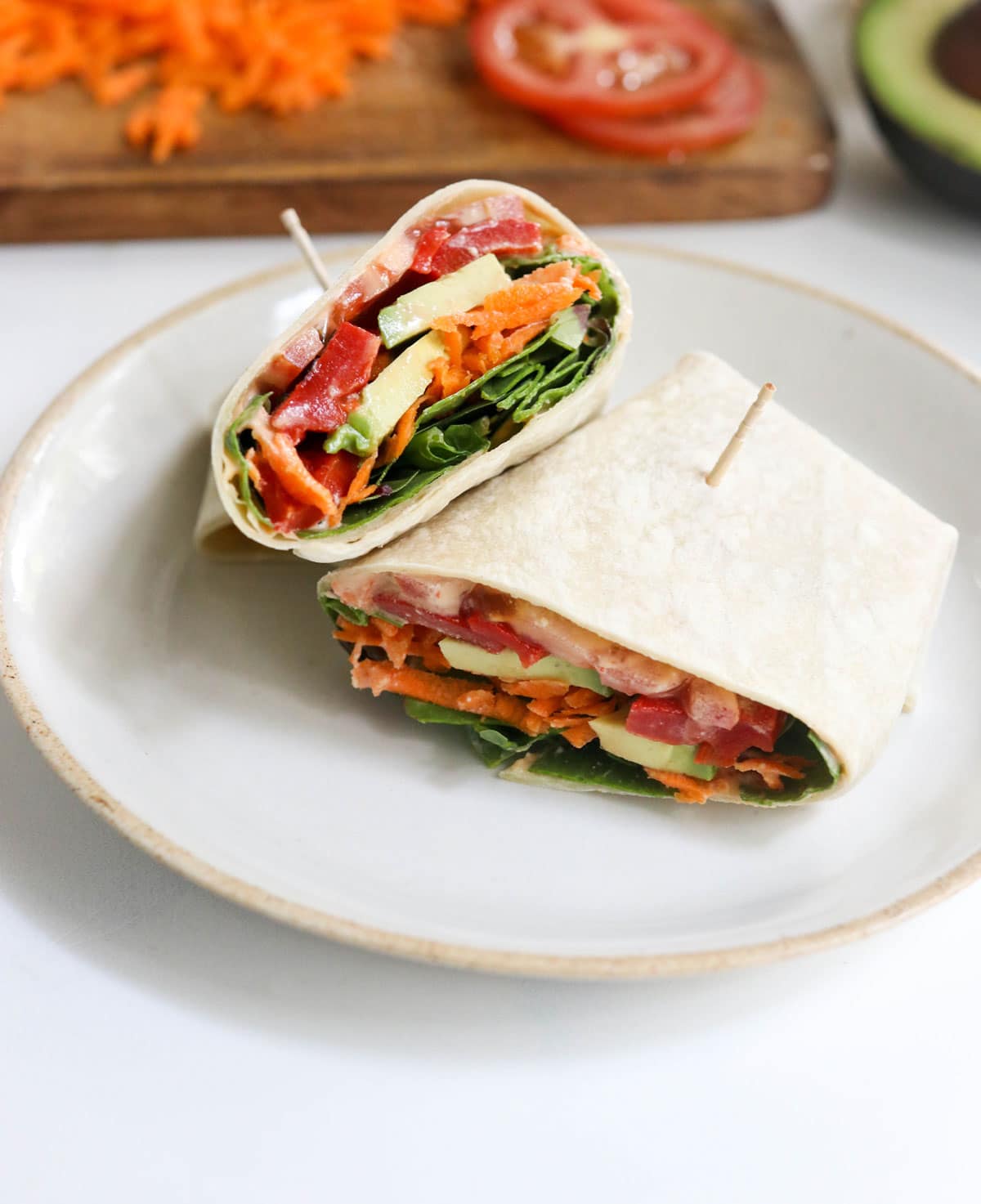 If you want to make easy veggie wraps for a party, or as a convenient packed lunch, they should keep well for 24 to 48 hours. I would recommend leaving any “wet” sauces out of the wrap, and instead serve them on the side as a dip, to avoid a soggy tortilla. 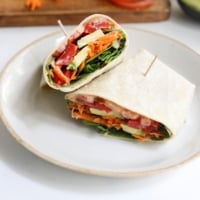 5 from 2 votes
This is the best Veggie Wrap! It's filled with a flavorful spread, then topped with sweet & crunchy veggies. It's a healthy lunch you can take on the go.
Print Recipe Pin Recipe Rate Recipe
Prep Time: 10 mins
Total Time: 10 mins
Servings: 1

If you want to make a veggie wrap in advance for a packed lunch or party, you may want to leave out any "wet" sauces (like chimichurri or a salad dressing) so the tortilla doesn't get too soggy. Instead, you can serve the sauce as a dip on the side. These should pack well in an airtight container in the fridge for up to 48 hours.

Nutrition information is for one veggie wrap, but will vary widely depending on the type of tortilla and sauce that you use. This is just an estimate, not a guarantee.

If you try this recipe, please leave a comment below and let me know what you think. If you try anything different, I’d love to hear about that, too! We can all benefit from your experience.

What’s your favorite easy lunch? My Quinoa & Black Bean Salad is another go-to in our house! 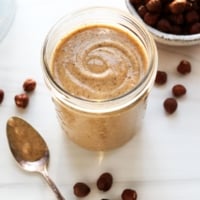 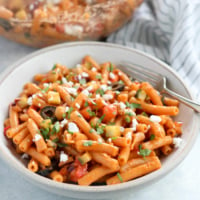 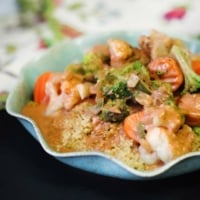