I’m sorry to say it, but I don’t have another out-of-this-world recipe to share with you today.

Austin had to work late last night, so instead of creating an elaborate meal for the two of us, I had a simple dinner of roasted veggies and finished reading a book that I’ve been working on for the past week. It was a doozy. 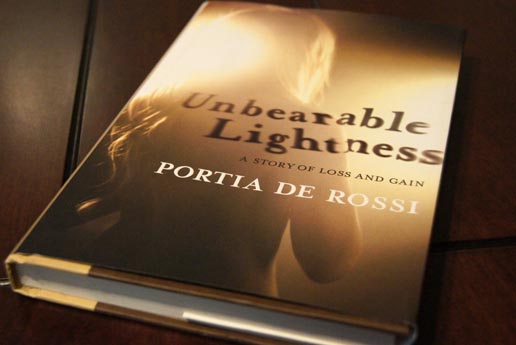 I was a bit torn about reading this book– as I wasn’t sure how reading a detailed account of anorexia and bulimia might affect me. I have heard that reading accounts of disordered eating can be a trigger for people who have suffered from disordered eating themselves. However, I figured this was a drastic case and didn’t think I would really be able to relate to Portia’s previous behavior at all. And once I picked this book up, I could hardly put it down! Portia is impressively honest and open, and watching her progression from a “healthy dieter” to a “disordered eater” is incredibly realistic.

In fact, a few passages in her book really hit home for me.

“I finally understood that by being on a perpetual diet, I had practiced a “disordered” form of eating my whole life. I restricted when I was hungry and in need of nutrition and binged when I was so grotesquely full I couldn’t be comfortable in any position buy lying down. Diets that tell people what to eat or when to eat are the practices in between. And dieting, I discovered, was another form of disordered eating, just as anorexia and bulimia similarly disrupt the natural order of eating. “Ordered” eating is the practice of eating when you are hungry and ceasing to eat when your brain sends the signal that your stomach is full. “Ordered” eating is about eating for enjoyment, for health, and to sustain life. “Ordered” eating is about not restricting certain kinds of foods because they are “bad.” Obsessing about what and when to eat is not normal, natural, and orderly. Thinking about food to the point of obsession, and ignoring your body’s signals is a disorder.” -Unbearable Lightness, pg. 295

I don’t know about you, but I find it incredibly frustrating that dieting has become such a regular practice in our society.

It seems that being on a diet, and feeling dis-satisfied with your figure, is becoming “the norm.”  Just think about how many diet books are released every year! (I certainly have collected quite the diet library, myself!) And don’t get me started on all the health and fitness articles published each month–> all filled with “get slim quick” plans, guaranteed to finally give you the body of your dreams. But do any of these diets really work in the long run?

“All I had done throughout my life was diet and gain the weight back. Therefore, the only conclusion I could make was that diets don’t work… I decided that I would never diet again.

The fact that I stopped labeling food as “good” and “bad” made me just see it all as food. There was no bad food. There were just bad eating practices. I began eating every single thing I wanted when I wanted it, without guilt, without remorse, without feeling anything other than happy about the taste of the food I had chosen to eat. Initially, I gained a little weight. But over time, I found that I didn’t want ice cream every day. Not because of fear of gaining weight, but because it was too cold, or too sweet for my taste buds after a salty pasta. I stopped overeating. I stopped thinking about food. I ate exactly what I wanted, when I wanted it, without any feelings of guilt or being “good” or bad.”

Within two months, I was maintaining my weight easily… I was one of those “lucky” people who could eat whatever they wanted and never gain weight. I stopped weighing myself. I simply didn’t care about weight anymore because it was always the same, always a comfortable, good weight for my body, and I stopped thinking about food because every single food item was available to me at any moment of the day. There was nothing left to think about.” -Unbearable Lightness pg. 296-297

To me, Portia’s new mentality still seems like a Utopian dream. The idea that I could really eat whatever I want, whenever I want– and not blow up to the size of a balloon? Craziness!

But it might just be crazy enough to work.

“To say that you can stay at your natural body weight and be healthy by eating what you want and not working out sounds extremely controversial, and yet people have lived this way for hundreds of years. It seems to me that it’s only since 1970 that the concept of diet and exercise has existed in the way it does now, which is based on exertion and restriction being the key to weight loss, and yet since then, we have seen an increase in obesity in countries that have adopted it. (These are also the countries where the fast-food industry boomed during that time.) The diet industry is making a lot of money selling us fad diets, nonfat foods full of chemicals, gym memberships, and pills while we lose a little of our self-esteem every time we fail another diet or neglect to use the gym membership we could barely afford. Restriction generates yearning. You want what you can’t have. There are many ways to explain why the pendulum swing occurs and why restriction almost always leads to binging… All people who live their lives on a diet are suffering.” -Unbearable Lightness, pg. 302

That’s not to say that if you’ve successfully lost weight on a diet, or are currently enjoying a “lifestyle change” that you’ve made, that you are necessarily suffering. I definitely don’t mean to offend anyone with this post! I’ve had successful, happy bouts of enjoying a healthy, fulfilling diet– without feeling restricted– myself. But I do think it’s more of a rarity. And I can speak from experience that the second I start thinking of losing weight, be it for an upcoming event, or just to fit into a smaller pair of jeans, thoughts of binging are soon to follow. And restriction, followed by binging, is probably the reason why only 5% of people who lose weight can actually keep it off!

Reader Feedback: What do you think about NOT dieting? Are you able to let yourself eat whatever you want with no guilt? If not, are you willing to try?