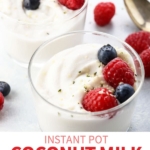 Coconut milk yogurt can be expensive and full of additives when you buy it in the store, so I’m super-excited to share this fool-proof method for making your own dairy-free Instant Pot Coconut Milk Yogurt. (If you don’t have an Instant Pot, don’t worry– I’ve got you covered further down in this post.) 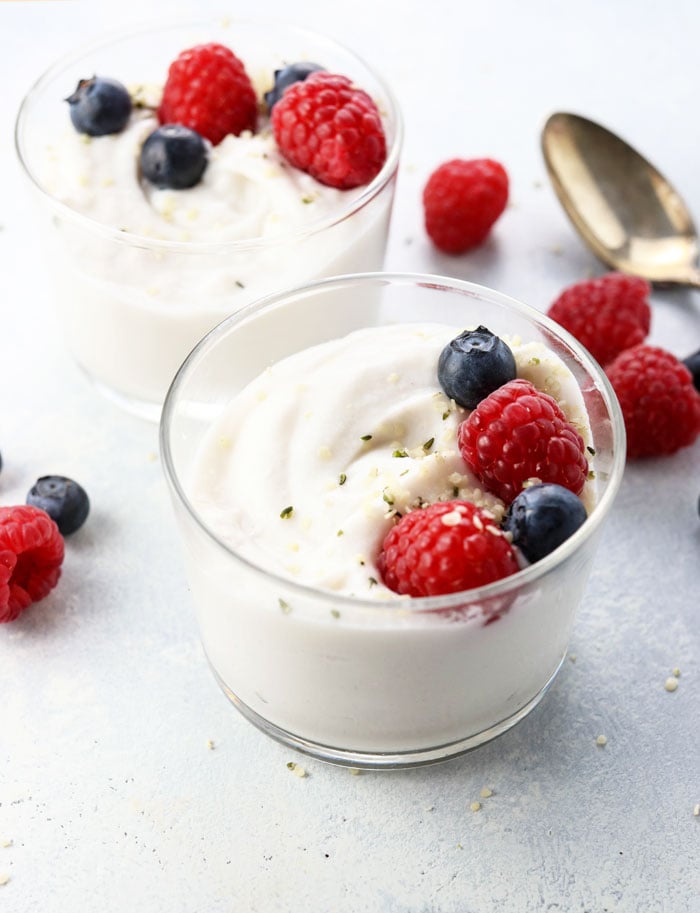 As an Amazon Associate I earn from qualifying purchases.

Making Yogurt in the Instant Pot

Using an Instant Pot makes this process easier when it comes to keeping a proper temperature for fermentation, but you can also use a simple glass jar in a warm area of your home for similar results. I’m still in minimalist-mode after living in tiny apartment kitchens for so long in Los Angeles, so I aim to keep my kitchen appliances to a minimum.

That’s why when I decided to finally take the plunge and buy the Instant Pot, I wanted to get the model with the yogurt-making function, so it could multitask. Using the yogurt function did NOT come intuitively to me, but I finally figured out a one-pot method that makes the yogurt-making process as easy as possible.

Creamy coconut milk (the culinary or canned version, not the type found in the refrigerated section) makes a natural substitute for dairy milk in yogurt-making, but it won’t thicken up like the creamy yogurt that we’re used to on its own. It needs some sort of thickener added to it. The common thickeners used in yogurt making include:

I tried using tapioca starch first, but I found it difficult to achieve the results I wanted. I needed to use about 1/4 cup of tapioca starch per 2 cans of coconut milk to get the thickness I was looking for, and the resulting mouthfeel was a bit “off” to me. If you’ve ever tasted store-bought yogurts with a lot of gums and thickeners, the tapioca-thickened yogurt reminded me of that. 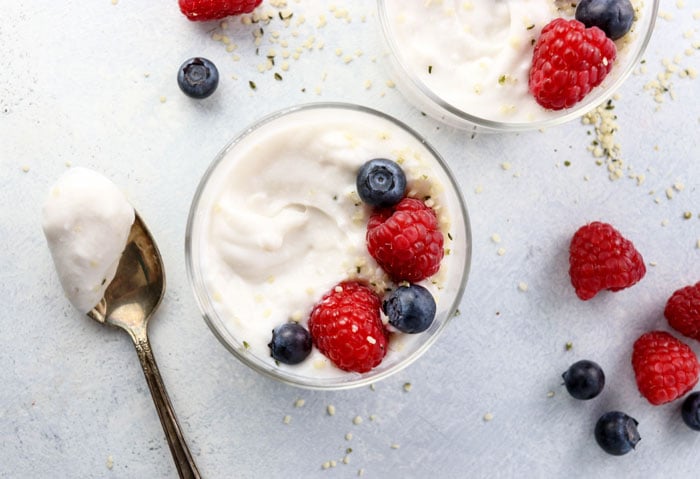 How to thicken Coconut Milk Yogurt

To keep this dairy-free yogurt vegan I decided to use agar agar flakes instead. If you’re not familiar with Agar Agar, it is a dried seaweed that acts very similar to gelatin. I bought in the “exotic foods” aisle where they sell Nori sheets for making sushi in my local Whole Foods, but if it’s not available to you locally you can also order it on Amazon. One bag will last you quite a while, and you can use it to make other recipes like my Vegan Strawberry Cream Pie or Vegan French Silk Pie.

There’s also the possibility of using no thickener if you want to use straight coconut cream (the part that thickens up when chilled in a can) to make your yogurt instead. I don’t care for the taste or texture of the yogurts made with only coconut cream, as I think they taste too rich and fatty, but feel free to go that route if you’d like to.

As written, this coconut milk yogurt recipe produces a very thick result, similar to a Greek-style yogurt, thanks to the thickener and fat content of the full-fat coconut milk. The yogurt will be very thin and runny when it’s in the Instant Pot fermenting, but it will thicken up perfectly once you transfer it to the fridge to chill. 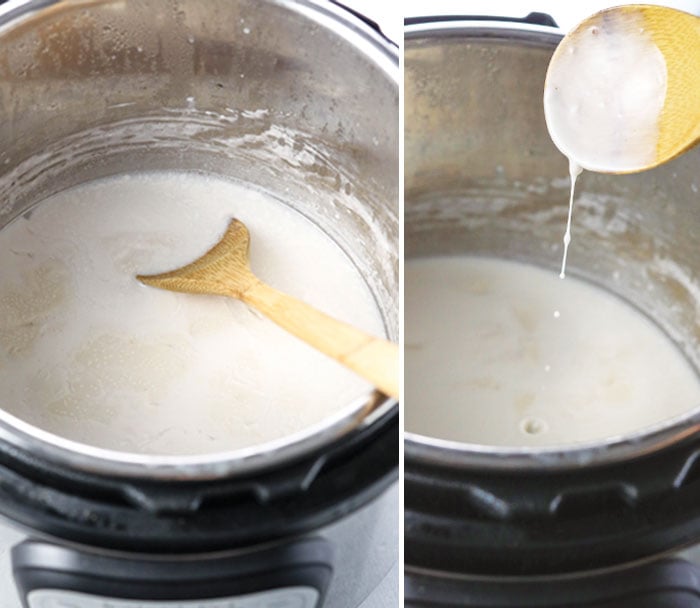 Here are a few other things to keep in mind when making Coconut Milk Yogurt in the Instant Pot:

I think it’s also important to note that if you don’t care for the taste of coconut milk, you probably won’t care for the taste of this yogurt. It definitely tastes like coconut milk, though you can adjust the flavor however you like when it’s done fermenting, either by adding some sweetener or fruit. Coconut milk can also have a slightly grainy-texture from the desiccated coconut, so don’t expect the coconut milk yogurt to be quite as silky-smooth as dairy-based yogurts are.

I have been enjoying this yogurt served with my Grain-Free Pumpkin Seed Granola as quick breakfast or snack, so I hope you’ll enjoy this probiotic-rich yogurt just as much. I think it tastes similar, if not better, to the store-bought brands and costs just about $1 per serving, to help fit into your healthy eating budget! 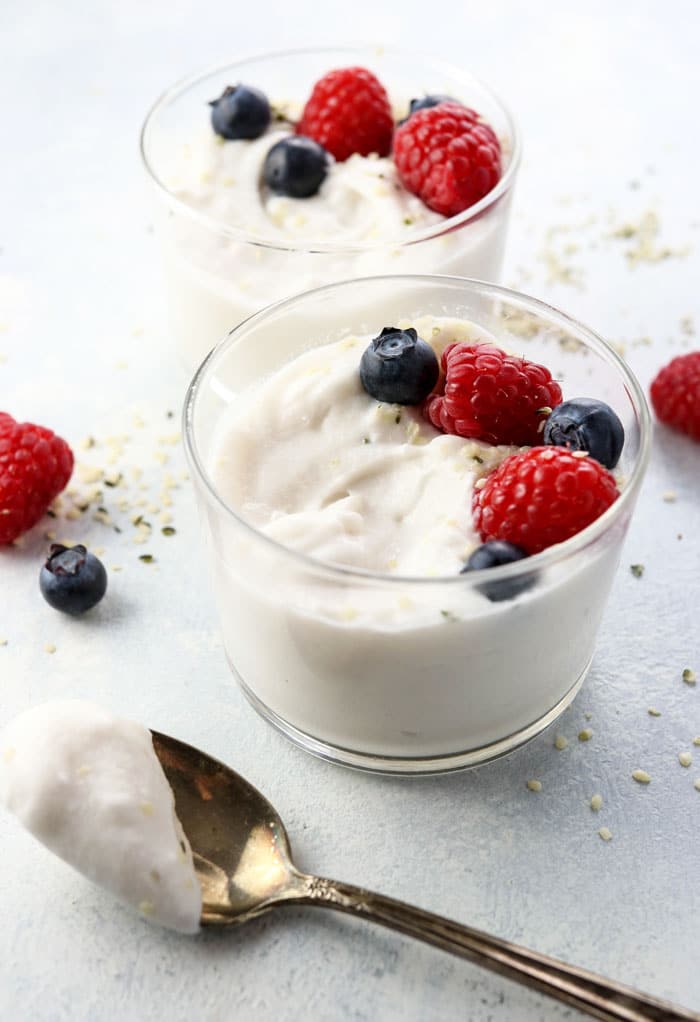 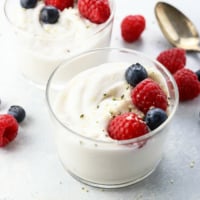 If you don't have an Instant Pot, make this yogurt on the stove top. Simply bring the milk to a rolling boil on the stove top and dissolve the agar flakes by stirring with a whisk. Pour the mixture into a very clean jar, add the maple syrup, and allow to to cool to 110-115ºF. Stir in the probiotic powder, seal the jar with a lid, then wrap the jar in a towel to keep it insulated. Store it in a warm place, such as in your oven with just the light on. (Some ovens have an option to stay warm at 100º, if you have that.) You can also use a yogurt maker, a dehydrator, or a heating pad set to very low to keep your yogurt warm. Be sure the temperature doesn't exceed 115ºF or you'll risk killing the good bacteria. Just like the recipe above, you'll want to ferment the yogurt for 18-24 hours for the best tart flavor.

Be sure to check out The Fresh & Healthy Instant Pot Cookbook. You can see a sneak peek here! 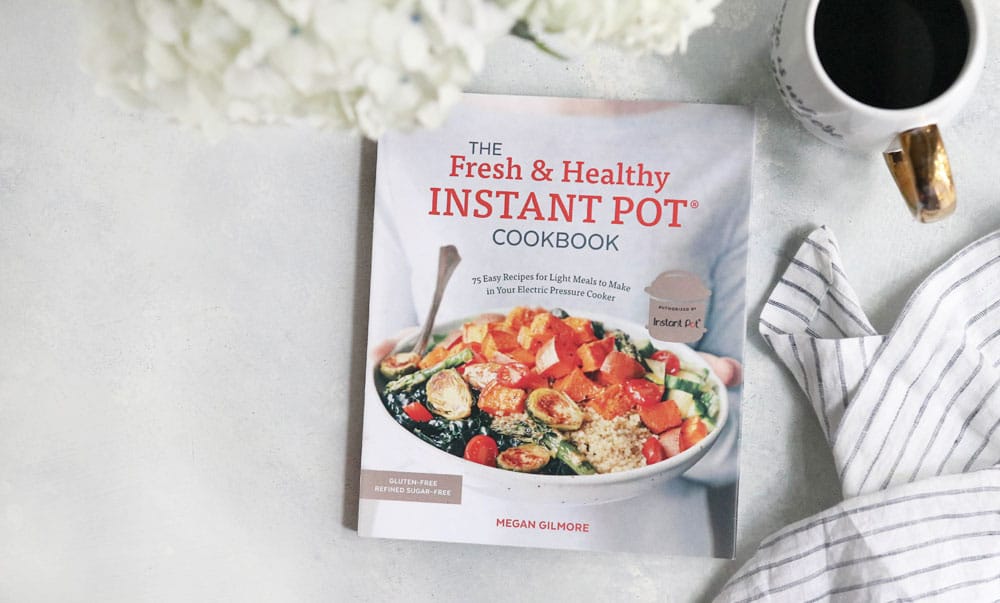 I hope you’ll enjoy this more affordable coconut milk yogurt. Let me know in the comments below if you give it a try!

Reader Feedback: Have you tried making Coconut Milk yogurt before? Let us know in the comments below if you have any additional tips or tricks! We can all benefit from your experience. 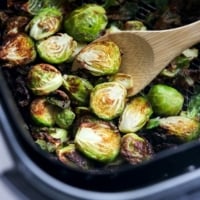 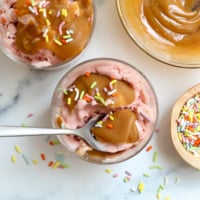 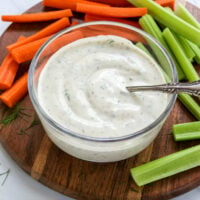 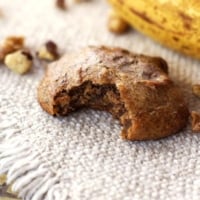