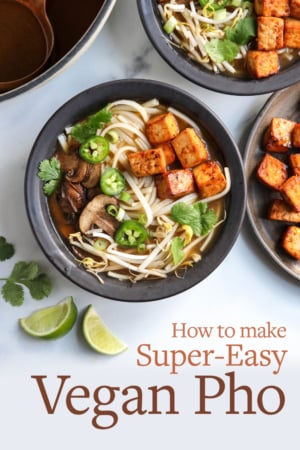 Vegan Pho is a comforting noodle soup that you can load up with your favorite toppings. This version is not at all traditional, but it’s definitely the fastest way you can make it at home!

What is Pho Broth Made Of?

Traditional Pho broth is made from beef bones that simmer for hours. This version skips the beef broth entirely, and uses store-bought vegetable stock as a time-saving shortcut.

What gives Pho its signature flavor?

Pho broth is typically simmered with spices (which are naturally vegetarian), so we can still get a plant-based broth at home using the following ingredients:

When making pho broth, it’s common to char the onion and ginger in the oven first, but if you know me, you know I like to use as few steps & appliances as possible when making a recipe.

Instead, I skip the oven entirely and simply brown some sliced onion, ginger, and garlic in the bottom of the soup pot. You can add a splash of water every now and then to help the onions pick-up the caramelized flavor, and everything will get nice and golden in 10 minutes or less.

No need to dirty an extra pan or wait for your entire oven to preheat.

How to Make It

To make this vegetarian Pho, you’ll briefly toast the spices with the tender onions, ginger, and garlic. I like to use whole spices when I can find them, but see the notes below the recipe card if you only have ground spices on hand.

Add in the veggie broth and tamari (which is gluten-free soy sauce), then bring the mixture to a simmer. Typically, you don’t let Pho broth come to a rolling boil, but you’ll let it gently simmer for 15 to 30 minutes.

Vegan Pho can be ready in as little as 15 minutes when you’re pressed for time, but the flavor develops even more if you can let it simmer for 30 minutes.

While the broth is simmering, cook the noodles so they’ll be ready to serve when the broth is done. The most traditional noodle to use is rice noodles, which look similar to fettucine or linguine, but you can use brown rice noodles, or even chickpea noodles, if you like.

When the broth is done simmering, strain out the solids. You’ll be left with a flavorful broth that you can ladle over the prepared noodles in individual bowls.

Now you get to customize your bowl! Here are some ideas that will add texture, flavor, and nutrients to your meal.

You can also add any roasted veggies you have on hand, like cabbage, broccoli, or bok choy.

How to Eat It

Before you eat this Vegan Pho, be sure to stir the toppings into the broth. This will give extra flavor to your soup!

Then, traditionally you will use chopsticks to eat the noodles and veggies out of the broth, and use a soup spoon to drink the broth. (You can also lift up the bowl and sip the broth directly from there.)

I personally find it challenging to eat noodles with chopsticks, so you can also use a fork or spoon to help scoop the noodles and veggies out of the broth. I hope you’ll enjoy it! 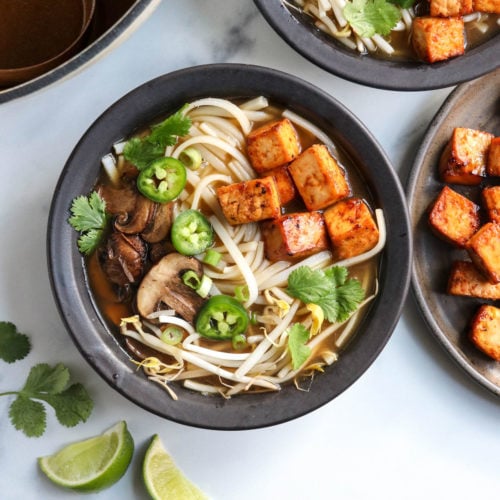 Nutrition information is for 1/4 of everything listed in the ingredients. This information is automatically calculated, and is just an estimate not a guarantee. It will change based on what you add to each bowl. If you want to skip store-bought broth, I’ve also made this by using only water and adding carrots and celery into the broth while it simmers. You’ll need to season with extra salt in this case, but it’s still delicious!

Need more comforting soup ideas? Try one of these dairy-free & vegetarian recipes below.

If you try this Vegan Pho recipe, please leave a comment below and let me know how you like it. And if you make any modifications, I’d love to hear about those, too! We can all benefit from your experience.