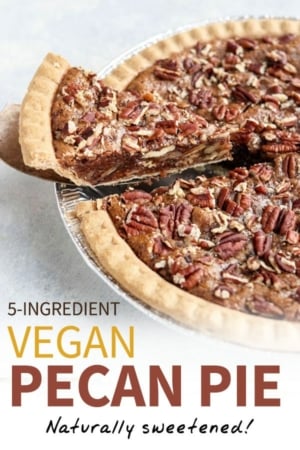 This Vegan Pecan Pie tastes remarkably similar to the kind my grandma used to make, but this one is naturally sweetened without using corn syrup. I’m amazed by how well the filling sets, without using eggs! 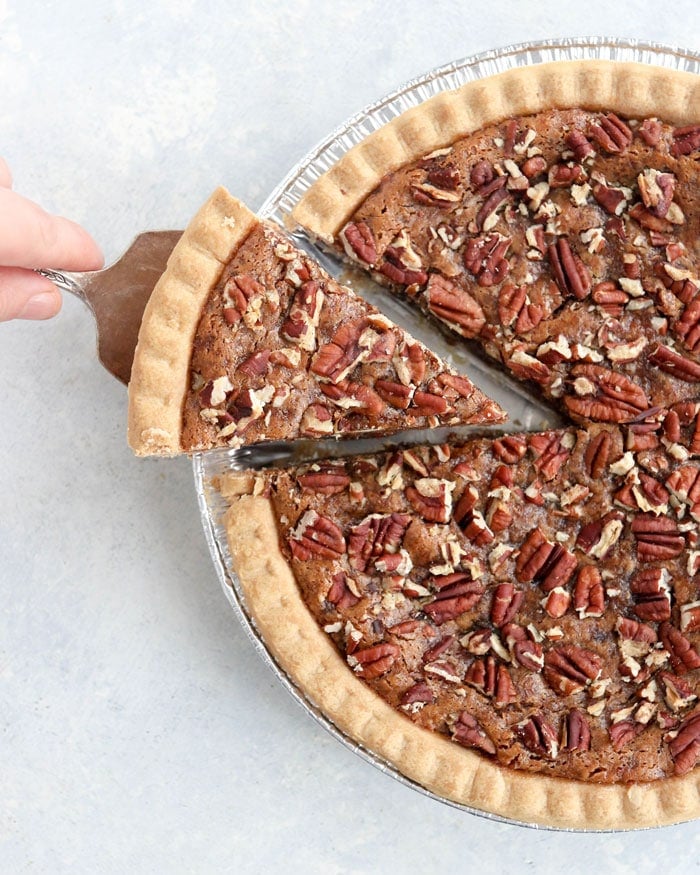 What is Pecan Pie Made With?

I wanted this pie to be as healthy as possible, without sacrificing the taste or texture. I included dates in the filling, to help add some structure and natural sweetness, but I also used a little maple syrup to boost the flavor.

Adding the liquid sweetener helps to “loosen up” the filling so that it doesn’t have the texture of a date ball. 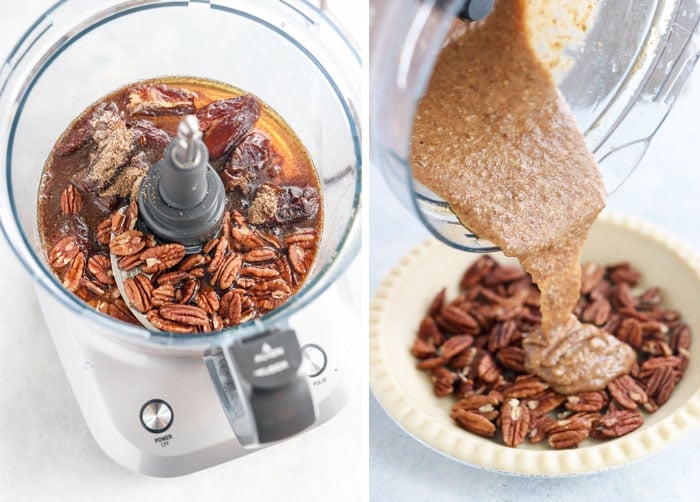 To make this pecan pie egg-free, I added 2 tablespoons of ground flax seed to act as a binder. I find that if I use more than that in any given recipe, I can start to taste the flax seeds, but I can’t taste them at all in this recipe, and neither could my taste testers. Grinding some extra pecans into the filling also helps with the binding, and provides extra pecan flavor!

With a simple 5-ingredient filling, this recipe is just about as easy as it gets. All you need is a blender or food processor to blend it together. (Similar to my Vegan Pumpkin Pie!)

I prefer using the food processor so I can make my crust in it first, and then make the filling in the same bowl. There’s only one dish to clean that way!

If you’d like to make a pie crust from scratch, try my Vegan Pie Crust, which is also gluten-free. You can use any other unbaked pie crust that you love, too. 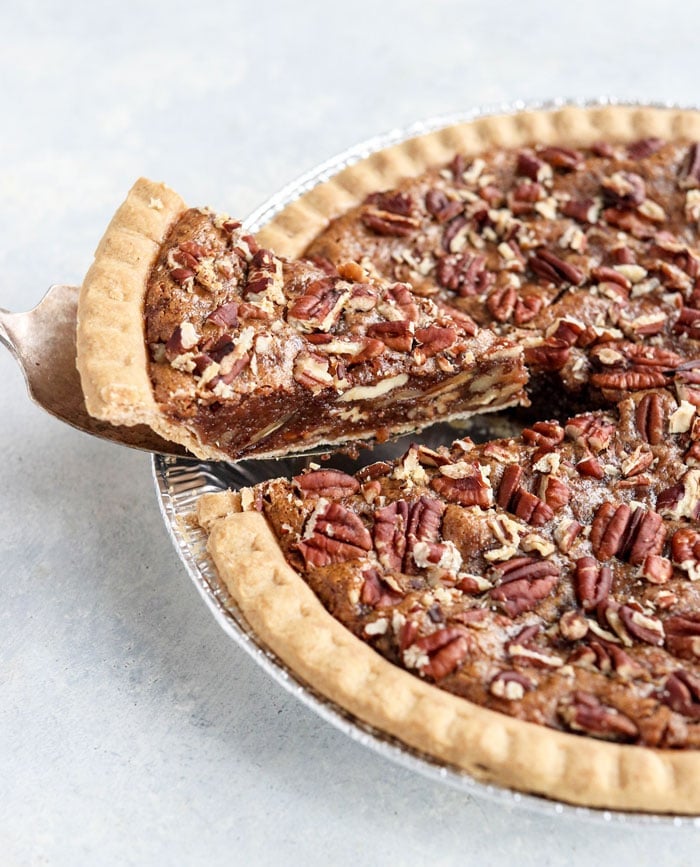 Because I had to test this recipe so many times, I actually relied on a frozen gluten-free crust from Trader Joe’s so that I wouldn’t have to make a crust from scratch every time. (Testing recipes is like a science experiment, so it’s a good idea to have a control when testing the filling– in this case, a store-bought crust kept the experiment results consistent!)

How to Sweeten Vegan Pecan Pie with Dates

I tested this recipe so many times because I couldn’t decide how many dates was the “perfect” amount for this pie. I landed on the recipe below, which uses a 1:1 ratio of dates to maple syrup. 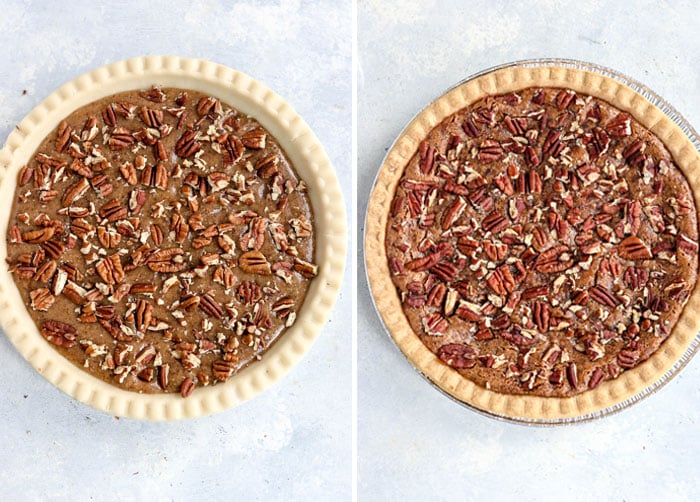 I also tested this recipe using only 1/2 cup of dates + 1 cup of maple syrup, and enjoyed the results– but my testers thought the flavor wasn’t quite as authentic, since the maple flavor was a little heavier. I share this just in case you’re short on dates for this recipe and want to try it that way instead! 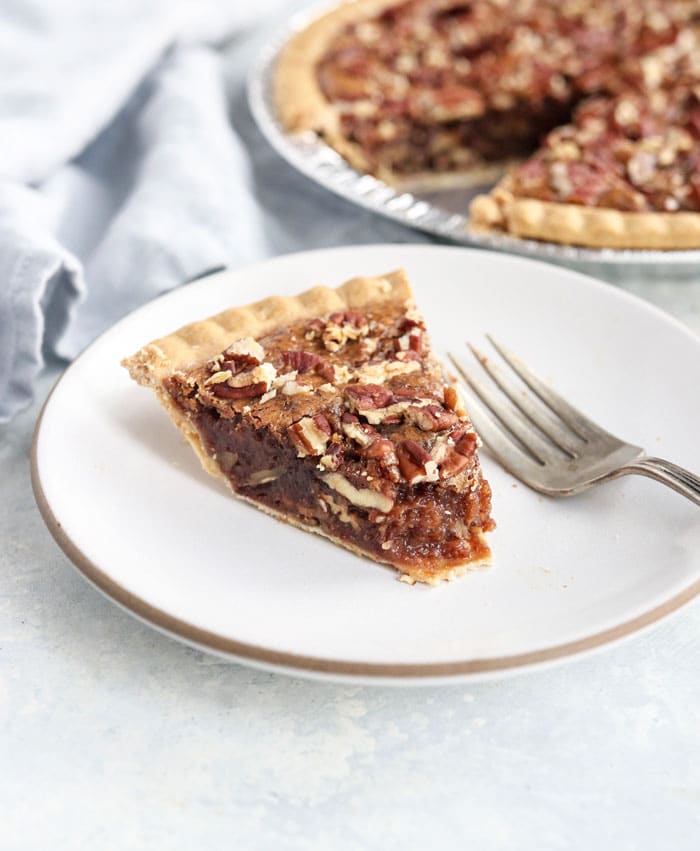 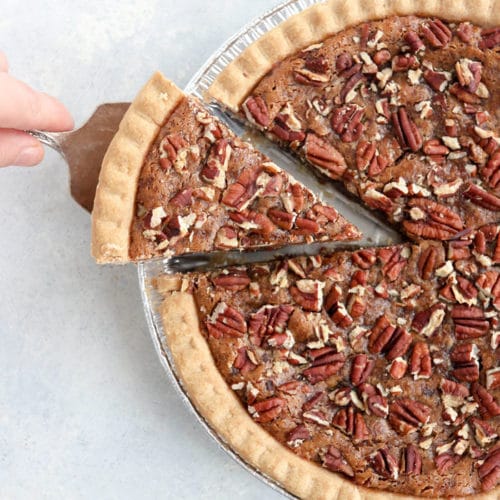 As always, if you try something different with this recipe, please leave a comment below to let us know how it worked for you. We can all benefit from your experience!

Reader Feedback: What’s your favorite holiday pie? I think mine is still French Silk Pie, but my strawberry cream pie and this pecan pie are not far behind!