Pizza has to be one of my favorite meals EVER.

As a child, I loved making my own mini-pizzas at home, using English muffins as the crust, adding my favorite toppings, then broiling it in the oven until the cheese was bubbly.

I was under the impression that pizza was a perfectly healthy meal, because that’s what we were taught in school. According to the old food pyramid, I remember my 2nd grade teacher telling us that pepperoni pizza was a well-rounded meal, covering a serving of bread, vegetables (from the tomato sauce), meat and dairy. And apparently, pizza still counts as a vegetable in our school systems.

Too bad our school system doesn’t serve the type of pizza I enjoyed tonight, which was reminiscent of my childhood English muffin pizzas, but with a much heftier nutritional punch!

Because it’s made with actual veggies. 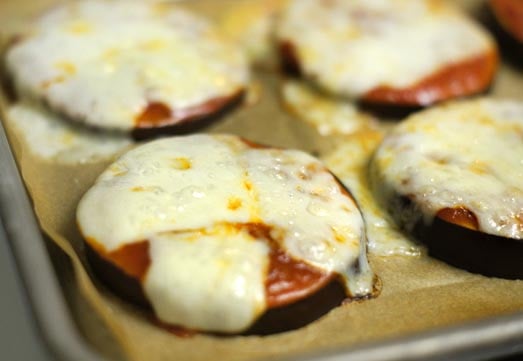 Recently I tried using eggplant slices as the pizza crust, which are amazingly “bread-like” when roasted.

I’ve always been a little intimidated of eggplant. The few times I’ve tried preparing it at home, it’s turned out bitter or slimy. But this time, it was a success!

I think the trick is slicing 1/2-inch rounds, then roasting them on parchment paper. (no need for oil!) 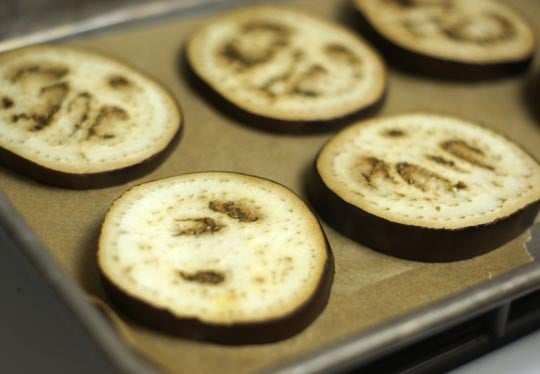 I roasted the slices for 20 minutes at 350F, but started watching them after 15 minutes, because some slices were smaller than others.

After the initial roasting, your eggplant “pizza crusts” are ready for toppings! 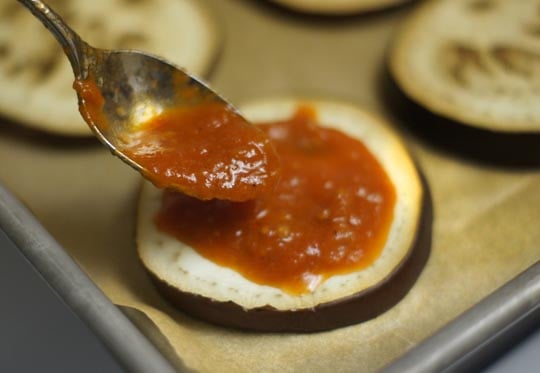 I added my favorite marinara sauce, then popped them back in the oven for another 5 minutes to heat it up and remove a bit of the moisture.

Then it’s time for cheese, or your pizza toppings of choice. 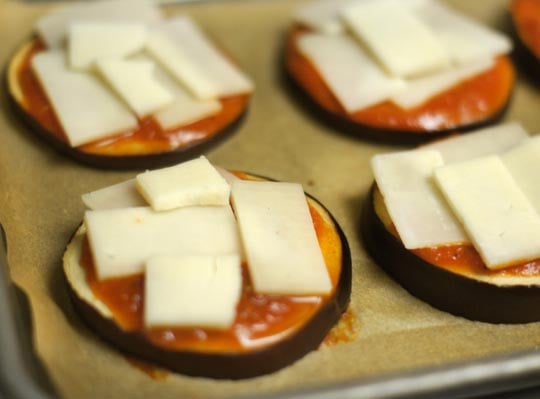 I used slices of raw goat cheddar, then placed my mini-pizzas under the broiler for 2-3 minutes, until the cheese was hot and bubbly.

I love how simple these pizzas were to prepare (even easier than making the cauliflower pizza crust), and how they tasted totally decadent, even with a veggie base!

Reader Feedback: Did you learn about the food pyramid like I did? Was pizza considered a “healthy” food to you growing up?